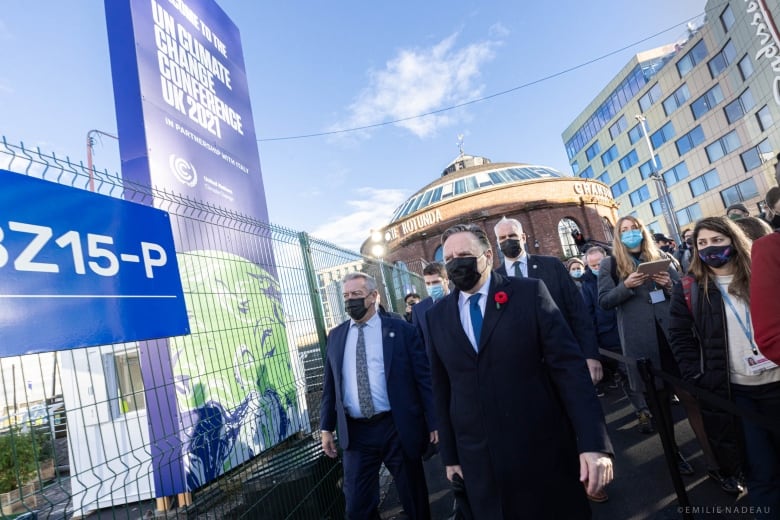 The movement to keep oil and gas in the ground has reached Canada, as Quebec joined the Beyond Oil and Gas Alliance this week — becoming the first North American member of a new group being launched at the United Nations climate conference in Glasgow that wants to phase out the production of oil and gas.

It comes after the Quebec government committed to permanently ban all oil and gas exploration and extraction within the province, closing the door on the future exploitation of a significant amount of natural gas reserves that could supply the province with its own energy for decades — and providing a model for other provinces to follow.

“We see provinces move first. This is what happened in terms of our public health system. It’s also what happened quite significantly for carbon pricing, with Quebec and British Columbia moving first and then the federal government adopting this minimum standard across the country,” said Caroline Brouillette, a Montreal-based policy expert at Climate Action Network Canada.

“So it totally makes sense that this is the way it would go forward in terms of putting an end to fossil fuel expansion in Canada.”

Quebec does not currently produce any oil and gas, but it has 182 active exploration permits that cover 32,000 square kilometres of land, Brouillette said.

Cutting emissions but not production

Cutting fossil fuel production also means targeting the emissions when oil and gas are burned. Canada, like other countries in the Paris Agreement, is only required to report emissions that come from its territory.

“So most of the fossil fuels that Canada produces, we export and go somewhere else, and then they’re consumed and they’re burned. And the emissions associated with that shows up on another country’s tab,” said Angela Carter, an associate political science professor at the University of Waterloo in Waterloo, Ont., who researches the fossil fuel industry.

This has led to a growing call to target the production and supply of oil and gas, rather than just the emissions. Canada’s current plan to cut emissions from the oil and gas industry relies on making companies extract the oil more efficiently.

This modelling analysis took place before Prime Minister Justin Trudeau’s announcement this week of more ambitious targets for 2030 and a cap on oil and gas emissions that, when implemented, might lead to deeper emissions reductions.

“Yes, there is attention to bringing down the emissions associated with the extraction. And that needs to happen,” Carter said.

“But in terms of absolute emissions globally, that means also winding down production.”

Two recent reports have placed giant question marks over the continued production of oil and gas. In a headline-grabbing report in May, the International Energy Agency said that no new oil and gas fields should be developed anywhere in the world in order to limit an increase in the global average temperature to 1.5 C above pre-industrial levels.

Then in October, right before the COP26 conference, the UN Environment Programme released its Production Gap Report, which said that countries are currently on track to produce 57 per cent more oil and 71 per cent more gas in 2030 than would be consistent with limiting global warming to 1.5 C.

The report, which examined 15 major fossil fuel-producing countries, including Canada, also warned that steep declines in production will be required if the world is to meet its climate targets.

The Conference of Parties (COP), as it’s known, meets every year and is the global decision-making body set up to implement the United Nations Framework Convention on Climate Change, adopted in the early 1990s, and subsequent climate agreements.

The Beyond Oil and Gas Alliance that Quebec is joining is led by Denmark and Costa Rica. Denmark stopped issuing new licences for oil and gas exploration and plans to end all production by 2050. The country was the largest oil producer in the European Union.

Costa Rica, on the other hand, does not produce any oil and gas but has reserves that it will leave untouched.

“A lot of developing countries believe that in order to industrialize, in order to get that prosperity, they need to exploit their fossil fuel reserves,” said Catherine Abreu, executive director of Destination Zero, a non-profit that provides consultancy services to organizations working on climate justice.

Abreu is a member of Canada’s Net-Zero Advisory Body, a group of independent experts that provides advice to the federal environment minister on ways to achieving net-zero emissions by 2050. She says she’s hopeful that Quebec’s move will spread to other parts of Canada.

“Given the fact that British Columbia is relatively progressive on climate change and that there is a similar level of public concern over climate change in B.C., as there is in Quebec, I’m wondering whether we might see something happen there. That being said, the politics are different from province to province,” Abreu said from the COP26 summit in Glasgow.

“Every Canadian knows that very well, and the governments in major oil-producing provinces like Alberta and Saskatchewan and Newfoundland, they’ve not yet moved to a place where they’re really actively planning for a transition away from oil and gas for people and communities.

“And so it’s no wonder that the workers and communities in those provinces are not yet willing to accept the idea of that kind of transition because their governments haven’t made a plan for what comes next.”

Meanwhile, Canada’s oil and gas industry is insisting it still has a role to play in meeting the goals of the Paris Agreement. In a statement released Friday, the Canadian Association of Petroleum Producers joined its counterparts in several other countries to call for “responsibly produced” oil and gas to be recognized as an important option for countries in “reducing energy poverty and strengthening energy security while also reducing CO2 emissions by displacing more carbon-intensive fuel sources.”

In an interview with CBC Radio’s The Current, Martha Hall Findlay, the chief sustainability officer at Suncor Energy, said, “The realities out there are that there is still a huge amount of demand globally for fossil fuels.” She stressed that oil and gas companies like hers are major investors in clean technologies in Canada.

And Newfoundland and Labrador Premier Andrew Furey travelled to COP26 to make a pitch for his province’s oil products, which he said are “some of the cleanest in the world” because their production has a lower carbon footprint than other types of oil.

It’s a pitch Abreu is skeptical about.

“I mean, every country that is a major oil and gas-producing country thinks that somehow their oil and gas is magical, non-climate-change-causing oil and gas,” she said.

“Canada is not alone in having that impression. And the reality is that all oil and gas causes climate change once it’s combusted. And so we really just need to release this myth that our oil and gas, wherever it comes from, is cleaner than anyone else’s.”

Destination Zero executive director Catherine Abreu says Canada’s plan to cap emissions from the oil and gas sector might not be enough to combat climate change. The NGO, which pushes to accelerate the transition away from fossil fuels, says the government should start looking at phasing out production of oil and gas. 8:01