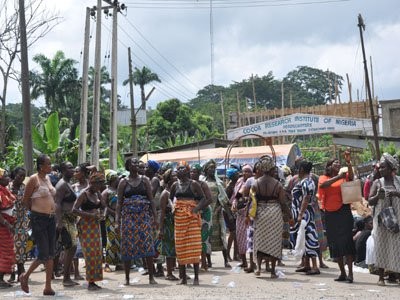 Tension is mounting in Ikere-Ekiti, Ekiti State, over the State Government’s plot to demolish a sacred tree serving as a sacrificial spot for the town.

Some youths and traditionalists of the town had on Monday resisted an attempt by the government agents and the contractor handling the project to remove the tree.

On Tuesday the youths continued with the protest and held up traffic for hours and also lit bonfires at Odo-Oja area of the town.

It was learnt that Governor Ayodele Fayose led operatives of the state security outfit, “Operation Flush” to the town in the heat of the crisis.

The indigenes claimed that the historical site known locally as the “Ereja” was the source of Ikere and was the place where the town was established and that removing the tree would be a bad omen. It is also the location where the annual Olosunta Festival is celebrated.

By the time our correspondent visited the scene on Tuesday, the residents had sacrificed a goat and pigeon and also placed other fetish objects at the site while palm fronds were also tied around the shrine.

Angry residents also formed a human shield around the shrine to resist any plan to demolish the site and uproot the sacred tree.

Addressing reporters at his palace on Tuesday, the Olukere of Ikere, Oba Ganiyu Ayodele Obasoyin, said, “cutting down the sacred tree and demolishing the Ereja was akin to passing a death sentence on him (Olukere).”

Olukere said, “Yesterday (Monday), the governor led the police to Ikere that the shrine be bulldozed; it is when a king dies that the branches of the tree are cut off and I went to meet the governor that he should not pass a death sentence on me.

“I want to say that Fayose wants to kill me; by ordering that the tree, which represents my life, be uprooted and the people resisted him. My subjects said they don’t want a tenant that will be making life difficult for the owner of the land because I am the owner of Ikere.

“The Ereja is where Ikere people meet once in every year if that tree is removed, it means they have killed the Olukere. The people came out yesterday (Monday) that they don’t want their king to be killed.

“The only way forward is that government should see reason with the people of Ikere and respect the people’s cultural heritage. If there is no town, you cannot be governor over people.

“They have that type of tree in Afao-Ikere, it was preserved for them and was not cut for a road project. The expatriate contractor said the sacred tree at Ereja does not hinder the construction work.”

The Olukere, who quoted from the 1933 Intelligence Report, said his throne was the first in Ikere and should be accorded due honour, respect, and recognition by the state government.

But the state government has maintained that the tree would be cut down to allow construction work to continue in the town.

Speaking with our correspondent on Tuesday, the state Commissioner for Information, Mr. Lanre Ogunsuyi, said the road construction must continue because, for every developmental effort, people must make sacrifices.

“Houses had been demolished, now that it is the shrine, it is only proper that we relocate the shrine to a proper place.

“With the necessary appeasement, the shrine could be relocated. All the gods in Yoruba land are for protection and not for death. We want to assure him (Olukere) that nothing bad will happen to him.

“The government will continue with the construction of roads, government must carry on with its responsibilities,” he added.