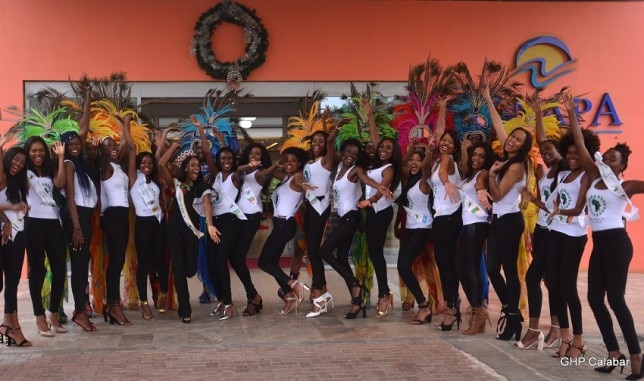 Some of the contestants representing African countries had different views and expectation of the pageant as well as host country.

27 out of the expected 36 countries’ contestants have arrived Calabar for the second edition of the Cross River State Miss Africa Climate Change Beauty Pageant.

Some of the contestants representing African countries had different views and expectation of the pageant as well as host country, Nigeria.
Miss Somalia wants contrary beliefs

Miss Fatima Ibrahim Murtar, a Moslem contestant from Somalia who sounded very optimistic of winning the crown said: “I want to do something different contrary to my belief.”

She explained that “We are already experiencing the effect of climate change in Somalia with deadly drought all over and I want to use this platform if I eventually win to educate our people, especially those in the affected regions about the dangers and see how we could bring succour to them through empowerment with the support of international bodies.”
Miss South Sudan awed by Calabar scenery

Miss Hellen Itivita from South Sudan, who was awed by the beautiful Calabar scenery said: “It’s nice to be in Nigeria finally. I have been listening to their music, watched their movies but I have never been here but today, I thank God I made it here. It’s such a beautiful place to be.

On her chances of winning the crown, Hellen said: “I will stay positive. We all know Sudan is a war torn country and if I win this pageant I will work with the International Organizations there to preach more on the effect of climate change and environment.”
Contestants of Miss Africa 2017 play

Miss Gaseangwe Balopi, said: “It is an opportunity to visit Nigeria because I have always watched their movies right from when I was young and today I am physically here to see these beautiful people and its landscape.

“I am glad that African is gradually transiting to the green economy which is the future from the traditional monolithic economy and I want to be that change agent that will help propagate the message of climate change across Africa to make a difference.”

Miss Chikaodili Nna Udosen, who is representing Nigeria at the pageant, said she was overwhelmed to be selectable after a rigorous audition, adding that if she wins the 2nd Miss Africa Climate Change, “I will woo all the stakeholders to join Cross River State in the campaign against climate change which is becoming a global challenge.

“And I want to make my country proud by striving to win the pageant because it’s an honor to be the ambassador of this great event and I believe with the support of my people I stand a better chance to win the show,” she added.
Miss Africa

The pageant provides a platform aimed at creating awareness about the effect of climate change and its attendant impact.

Senior Special Assistant to Governor Ayade on Event Management, Tom Ikpeme who promised a bumper and most memorable 2nd edition of the pageant hinted: “As part of innovations winner of this year’s event will emerge through vote.”