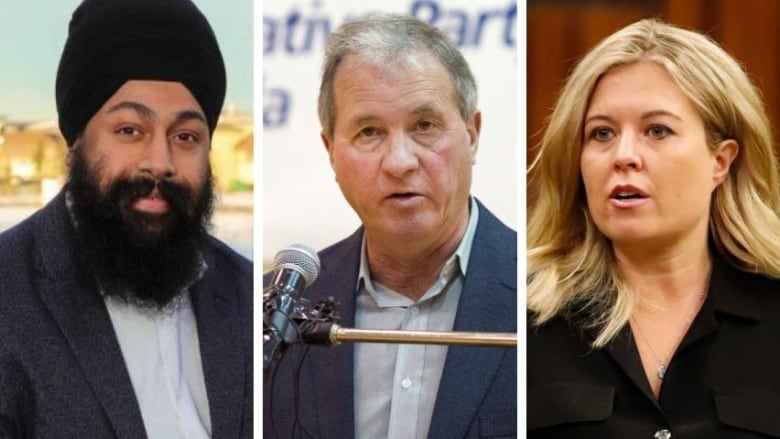 The Liberals have won a single seat in Calgary as the city’s other nine ridings remain Conservative blue, according to CBC News projections on Monday evening.

In what was widely seen as the closest race, in Calgary Skyview, CBC News has projected Liberal candidate George Chahal, who served as a Calgary city councillor for four years after a career in the financial sector, as the winner.

“We’re going to keep working together … we’re going to continue to fight for a better and strong Calgary and Canada,” Chahal said, as he took the stage with his family at a parking lot celebration in his riding shortly before midnight. He thanked his former city council colleagues for their support.

Chahal lead by 3,146 votes as of shortly after midnight MT Monday.

That gap is slightly less than the roughly 1,700 mail-in ballots in the riding, which will begin to be counted on Tuesday. The riding, which includes the northern Calgary neighbourhoods of Whitehorn, Saddle Ridge and Martindale, is largely made up of visible minorities, nearly half of whom are newcomers to Canada.

He was up against incumbent Conservative Jag Sahota, who worked as a lawyer before being elected as MP two years ago.

Conservative Greg McLean won Calgary Centre, which had also been polling closely between the Grits and Tories leading up to election day.

“Hopefully we’ll have a functioning minority parliament … and we’ll actually get some cooperation between the different parties,” he said.

McLean called the election unnecessary and said he continues to have full confidence in Leader Erin O’Toole, who he said had “an election thrust upon him in the middle of the pandemic.” He said the Conservatives have made strong advances in policy that they’ll continue to build upon going forward.

“I’m so proud of George Chahal … I know that he will do great things for Calgary, and I’m so excited we have a progressive voice going to Ottawa,” she said. “I think it makes a lot of different to have Calgary at the Canada table.”

These are the candidates that have been elected in Calgary, according to CBC News projections:

The Conservatives were down by 14 points in the Alberta’s popular vote late Monday evening when compared to 2019, while the NDP were up by nearly eight per cent, and the Liberals up nearly two per cent.

Calgary pollster Janet Brown said the question now is how the Alberta United Conservative Party’s handling of the pandemic influenced perceptions of the federal Conservative party.

“The popular vote is down, and I think we’re going to be wondering the extent to which Jason Kenney factored into that,” Brown said.

“Clearly, this is the Conservative heartland, but if you look at the popular vote, it’s down quite a bit. And the only reason there hasn’t been more seats lost is because seats in Alberta are traditionally won by such a large margin.”

Election results are not final until they have been confirmed by Elections Canada. The final vote count will not be known for days.

“Thank you, you are sending us back to work with a clear mandate to get Canada through this pandemic,” Liberal Leader Justin Trudeau said in a victory speech at 11:20 p.m.

Hundreds of thousands of Canadians mailed in their ballots this year, and Elections Canada won’t begin to count those votes until Tuesday morning — meaning the results of close ridings may not be known until Tuesday at the earliest and potentially days later.

There was a high turnout at advance polls as well, with more than 5.7 million electors casting ballots in advance, up by 18.46 per cent from 2019. An estimated 196,303 Calgarians cast their ballots at advance polls this year.

In the previous federal election, in 2019, Calgary went entirely blue when the Conservatives reclaimed two seats that the Liberals had pried away from them in 2015.

Those seats had been held by Kent Hehr, who is now running for mayor in Calgary, and Darshan Kang, who was elected as a Liberal but resigned from the party two years later after sexual harassment allegations.

Tories had 55% of popular vote in Alberta

In Edmonton, the NDP claimed a single seat, with incumbent Heather McPherson taking Edmonton Strathcona. The NDP were also leading in a second riding, Edmonton Griesbach, where New Democrat Blake Desjarlais was slightly ahead of Kerry Diotte but no winner had yet been declared.

Outside of Calgary, the whole of southern Alberta went blue, with CBC projecting Conservative wins in Banff-Airdrie, Foothills, Bow River, Lethbridge, Red Deer-Mountain View and Medicine Hat-Cardston-Warner, among others.

Independent candidate Derek Sloan, who previously represented the Ontario riding of Hastings-Lennow and Addington and was booted from the federal Conservative caucus after a known white nationalist donated to his campaign, finished in a distant fifth in his riding of Banff-Airdrie.