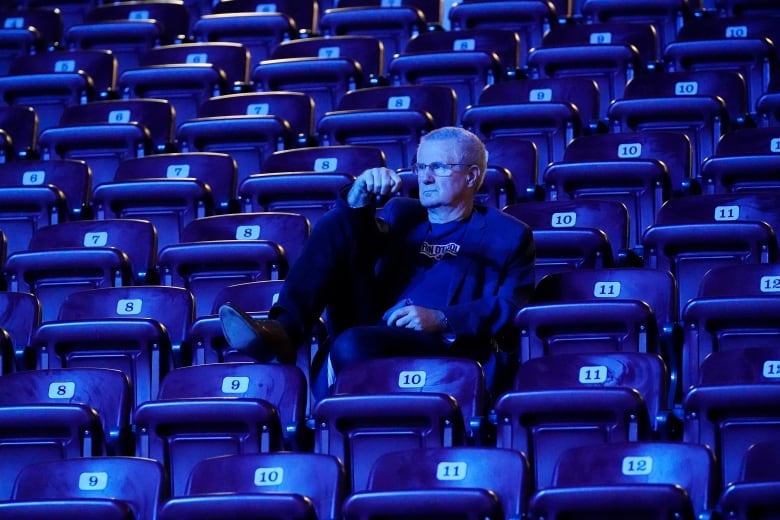 Conservative Leader Erin O’Toole started this campaign by introducing himself to the country as a more moderate Tory. So far, the results suggest Canadians didn’t buy into the message in a big way.

Nevertheless, O’Toole stood by his approach during his concession speech and warned disappointed party members that another snap election could be coming soon.

“In the months ahead, as Mr. Trudeau gears up for yet another election, we must continue this journey to welcome more Canadians to take another look at our party,” he said in the early hours of Tuesday morning.

“We will take stock of what worked and what didn’t and we will continue to put in the time showing more Canadians that they are welcome in the Conservative Party of Canada.”

His warning about a snap election likely was meant as a signal to the Conservative caucus to keep questions about his leadership at bay.

“If [Trudeau] thinks he can threaten Canadians with another election in 18 months, the Conservative Party will be ready,” he said.

“And whenever that day comes, I will be ready to lead Canada’s Conservatives to victory.”

WATCH | O’Toole warns of another election under Trudeau:

Conservative Party Leader Erin O’Toole said in his concession speech Monday night that he anticipates Liberal Leader Justin Trudeau will soon call another election since he did not get the majority he wanted. 1:08

Liberal Leader Justin Trudeau is projected to win enough seats to form another minority government. As of 2 a.m. Tuesday the Conservatives were leading or elected in 122 ridings —just one more than what the party held under former Conservative leader Andrew Scheer following the last election.

WATCH | ‘I will be ready’: O’Toole promises victory next time:

‘I will be ready to lead Canada’s Conservatives to victory,’ says O’Toole looking to next election

Conservative Party Leader Erin O’Toole says if Trudeau calls another election in 18 months, he will be ready for it. 0:23

Throughout the campaign, O’Toole pitched himself as a new breed of Conservative by distancing himself from the policies of past leaders like Stephen Harper and Scheer. Harper and Scheer were more closely tied to the Conservative Party’s more right-leaning predecessor parties — Reform and Canadian Alliance.

“My priority has been to build a Conservative movement where every Canadian can feel at home. Inclusive, diverse, forward-looking, progressive, worker-friendly,” O’Toole said at a campaign stop in Saguenay, Que this month.

After the leadership campaign and during the election campaign, he repeated his promise that a Conservative government led by him would make sure abortion services are available nationwide.

He also made direct appeals to the LGBT community.

“I think what Erin attempted to do at the beginning was to have Canadians get to know him,” said Raitt.

“When he won the leadership, he came out very clearly and he said I am pro-choice, I am an ally of LGBTQ+ community and I’m going to have a plan. And that’s exactly what he did starting day one.”

But O’Toole may have invited scepticism about his allegiances on the divisive issue of firearm regulations.

In early September, he reversed course on a platform promise to overturn a ban on some 1,500 makes and models of what the government describes as “military-grade weapons.”

The Liberal government first introduced the ban with an Order in Council in May 2020, which the Conservative platform promised to repeal. O’Toole said that the ban would remain in place under a Conservative government while a public review of the firearm classification system is conducted.

O’Toole fought to change how Canadians concerned about the climate crisis perceive the party — a perception driven in part by the delegates at the party’s policy convention who voted to reject adding green-friendly statements to the policy book earlier this year.

One of the first major policy announcements O’Toole introduced was a new climate plan, which was criticized for returning to the lower emissions targets first set by Stephen Harper.

There were some wins for those under the blue banner election night. The Conservatives gained seats in Atlantic Canada and unseated two cabinet ministers, showing some voters are ready for change.

Preliminary results show prominent and outspoken Conservatives like Pierre Poilievre and Michelle Rempel Garner were also rewarded and will return to the House of Commons. Scheer is also projected to his win his seat again.

The Conservative caucus will be welcoming O’Toole’s leadership rival Leslyn Lewis, who spoke directly to the social conservative members in the party and is projected to win in Ontario.

Given the results, questions about O’Toole’s future can be expected to dominate his news conferences in the coming hours and days.

“Little too early tonight to say it’s all bad for him.”

The coming days will also see analysts looking into whether the People’s Party of Canada managed to siphon enough votes away from Conservative candidates to keep them from joining Parliament.

In the final days of the campaign, O’Toole tried to appeal to those PPC supporters, arguing conservative-minded voters sick of the Liberal government should park their votes with the Tories rather than turn to the smaller party.

“There are actually millions of Canadians who are very frustrated with Mr. Trudeau. If they allow that frustration to do anything other than vote Conservative, they’re voting for Mr. Trudeau,” O’Toole said.

The PPC sits at about five per cent of the popular vote at last count. While that hasn’t translated into seats, and leader Maxime Bernier lost his own race, the party has done notably well in Ontario.

While People’s Party of Canada Leader Maxime Bernier lost in his riding of Beauce, Que., and the party failed to gain a seat in the 2021 federal election, he told supporters to stay strong and continue the fight. 2:19