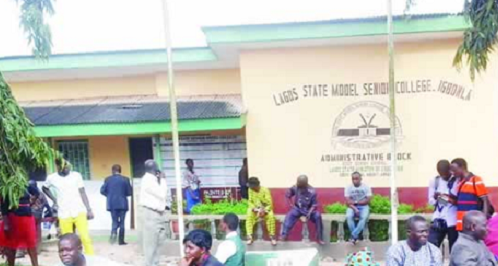 Ten days after the abduction of six pupils of the Lagos State Model College, Igbonla, Epe, affected parents say they have become weary of the government’s pledge to rescue the children without paying ransom.

SUNDAY PUNCH gathered that the parents have resorted to self-help by organising a committee among themselves to raise funds to facilitate the release of the children.

Our correspondent learnt that the money would be raised through contributions by each parent as well as aid from relations and friends.

The kidnappers, it was gathered, are currently requesting N100m ransom to free all the children.

The gunmen stormed the school premises at about 6am on Thursday, May 25, after notifying the school authorities of the attack three days earlier.

They broke the hostel doors, seized 10 senior secondary school pupils and led them to a waterside where their boat was anchored.

After profiling their family backgrounds, four pupils were released, while the assailants whisked away the remaining six pupils identified as Peter Jonah, Isiaq Rahmon, Adebayo George, Judah Agbausi, Pelumi Philips and Farouq Yusuf in a speedboat.

The kidnappers had earlier called some parents of the victims on Saturday, May 27, demanding N400m each from two parents while two others were asked to pay N100m each. They told the parents to meet with the school authorities and the state government to pay the ransom.

Three days after, the kidnappers called back and reduced the ransom to N600m, with parents of each child asked to pay N100m. According to the parents, the abductors are now demanding N100m for all the children.

However, the Lagos State Government had declined ransom negotiation with the kidnappers, insisting that they would be freed by the security agencies.

Although three suspects had been arrested, some parents who spoke to our correspondent on Saturday said they had lost patience with the government.

A parent, who did not want her name in print, said, “It is already nine days today (Saturday), and our children are still in captivity despite the government’s assurance to rescue them. Our minds will not be at rest without seeing these children.

“The kidnappers are now demanding N100m and they insist we should meet with the school authorities and the state government to pay. But they said they would not pay any ransom.

“All the parents have met again and we have decided to raise whatever amount we can through individual contributions. We have asked ourselves to call on friends and relatives to assist.”

Another parent said an agreement was also reached that whoever the kidnappers contacted, thenceforth, should negotiate on behalf of other parents.

“We have formed a committee and chosen a parent to coordinate the contributions. We are poor, but we cannot fold our arms while safety of our children are in danger. There is a parent that sells drinks. She said the highest she could raise was N50,000. She said she was the one taking care of the family,” the parent added.

The Lagos State Police Public Relations Officer, ASP Olarinde Famous-Cole, said the command disapproved of the parents’ move to raise the ransom, adding that efforts to free the victims had been intensified.

He said, “We are using intelligence report to get those pupils rescued safely. Apart from this, there is no information we can share for now. The command is not aware of the parents’ move and does not encourage payment of ransom.”

Calls put across to the mobile phone of the state’s Commissioner for Information and Strategy, Steve Ayorinde, on Saturday rang out. He had also yet to reply to a text message sent to him as of time of filing this report.