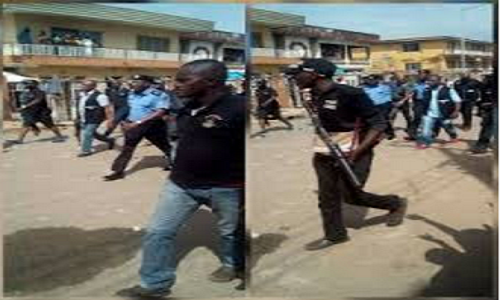 A minister with the Mountain of Fire and Miracles Ministry, Pastor Olawale (Solomon) Anthony, whose skull was fractured by some assailants suspected to be members of the Badoo cult, has been rejected by the Lagos State University Teaching Hospital, Ikeja.

PUNCH Metro learnt from the victim’s family that the hospital management, which claimed not to have any available bed space, also demanded the payment of N2m for surgery before any other thing could be done on the cleric.

This is just as the group killed a couple, identified as Mr. Olaitan Oseni and Mrs. Oseni, on their matrimonial bed on Friday in the Ogijo area of Ikorodu.

PUNCH Metro had reported that Olawale’s family was attacked around 2am on Saturday, June 10, 2017 at their house on Obayemi Street, Lambo Lasunwon Town, opposite Lagos State Polytechnic, Ikorodu.

The assailants were said to have smashed a mortar on the cleric’s head.

The wife, Edith Anthony, told our correspondent on Sunday that one of the attackers smashed the mortar on her head as well before she wriggled out to call for help.

She said, “It was the cry of my baby that woke me up that night. When I woke up, I sighted a strange man in our house. He was stark naked and had a mortar in his hand.

“When I asked him who he was and what he was looking for, he asked me to shut up. He hit my head and shoulder with the mortar. I managed to run out and call for help.

“When he saw that people were mobilising, he fled together with his accomplice who was outside.  I shook my husband several times and saw that he was unconscious and was bleeding in the head. We rushed him to a private hospital.”

Our correspondent was told that he was referred to the Ikorodu General Hospital, from where he was again referred to LASUTH.

The family members said when nobody paid them attention at LASUTH, they transferred him to the General Hospital, Lagos Island.

The immediate past chairman, Orija Community Development Association, Debo Obayemi, whose car was used to convey the victim around, said Olawale was admitted to the General Hospital, Lagos Island, where he spent some days before going through an X-ray.

According to him, the doctor at the hospital referred them back to LASUTH, saying the test result showed that he sustained fracture in the skull.

“We were told that he would need to undergo an operation and it could only be done at LASUTH. They asked us to go back there. When we got there, LASUTH officials requested the payment of N2m for the operation. They also said there was no bed space. They, however, gave the family a date to come for an appointment to see a doctor. The community has been struggling to raise money, all to no avail and we don’t want him to die. He is presently at home. He needs urgent help,” he added.

Our correspondent sighted an appeal letter, dated June 19, and addressed to the Majority Leader of the Lagos State House of Assembly, Sanai Agunbiade.

It read in part, “Mr. Olawale (Anthony) has undergone series of treatment at private and Lagos general hospitals. He is billed to undergo many more surgeries on his head following results of a brain scan.

“At the moment, Mr. Olawale is helpless and he cannot afford the cost of further treatment of himself and his wife, thereby putting their lives in serious danger. He requires the sum of N2m for immediate medical treatment.”

PUNCH Metro learnt that MFM had sent N30,000 to assist the family.

The Chief Medical Director of LASUTH, Prof. Wale Oke, denied that the patient was rejected by the hospital.

He said, “No, it can’t be that he will be rejected and sent home. If a patient comes to the hospital and there is no bed space, what they will do is to give him first aid and refer him to another hospital. LUTH has a problem and we cannot put beds on the floor.

“There are 26 other general hospitals that he could have gone to. So, nobody would ask him to go home. If we cannot take him, there is nothing we can do. If we take him and he dies, it will be an embarrassment. But we will not ask him to go home.”

He asked for the name and contact of the patient to look into the matter.

Meanwhile, residents of Idioro, in the Ogijo area of Ikorodu, woke up on Friday to the bodies of a couple allegedly killed by the Badoo cult.

The couple were said to have been killed on their matrimonial bed as a mosquito net was found on their corpses.

The cult members reportedly tore the window net of the victims’ house through which they entered the building.

A neighbour, who suspected something was amiss when the couple did not pick their calls, called the attention of other residents who saw their dead bodies after peeping into their uncompleted building.

Policemen from the Ogijo division were said to have deposited the corpses in a mortuary, while a mortar, allegedly recovered at the crime scene, was taken away by the police.

The Lagos State Police Public Relations Officer, Olarinde Famous-Cole, said the police were making efforts to rein in on the atrocities of the group.

“I, however, wish to categorically state that it is not right to tag all these murders as being Badoo-related.

“While I agree that there are patterns in some of these murders, which we are investigating, we must be careful not to give them a common name. A man could have killed his friend and fled and two days after, people would start saying the murder was committed by Badoo. We don’t have Badoo written on the forehead of anybody.

“Most of these crimes are not related to this group. We need to be specific; if not, we will just continue to run in circle,” he said.

He noted that the alleged murder of the Ikorodu couple was under the jurisdiction of the Ogun State Police Command.

He said, “A boy came to report at the station that his father and stepmother were found dead where they were sleeping. We cannot say if they were attacked by Badoo or not. Investigations are ongoing.”