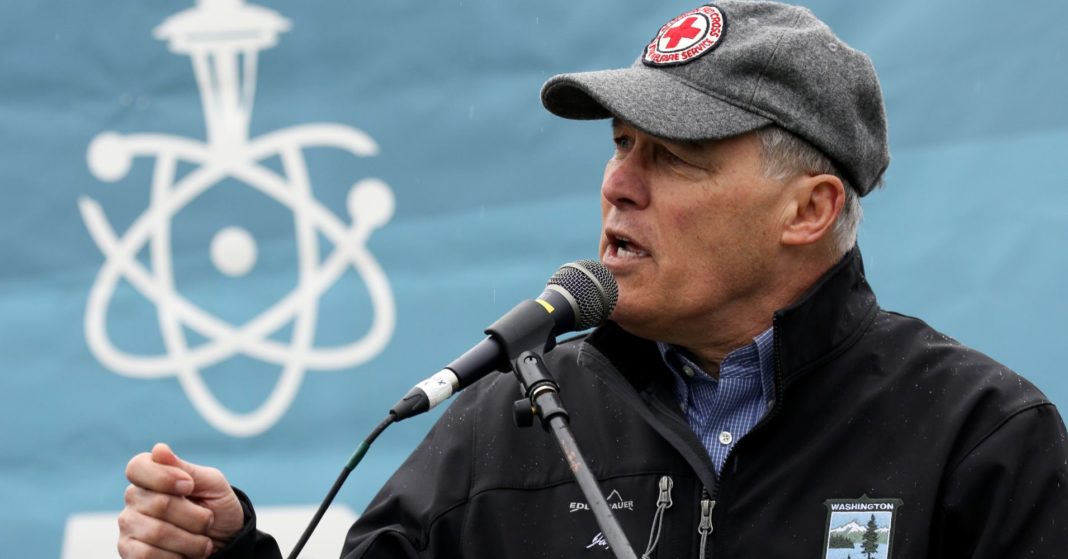 LOS ANGELES — While other 2020 Democratic contenders are focusing on wealth inequality in America and taxing the rich, Washington Gov. Jay Inslee is trying to position himself as the “carbon warrior.”

But he sees climate change as an economic issue, too.

Over the past year, Inslee has made several trips to early caucus and primary states such as New Hampshire, Iowa and Nevada to test out the political waters for a possible 2020 presidential run. The governor told CNBC this week that he’s going to “decide in weeks, not months,” on whether to toss his hat in the ring for the 2020 Democratic presidential nomination.

Inslee, who turns 68 years old on Saturday, talks very much like he’s already running while also touting a record of expanded investment in clean energy programs and technologies statewide. Last year, he announced the largest-ever purchase of green power for state operations through solar and wind power facilities.

“My candidacy I think has a couple of unique things driving it,” Inslee said. “One, both by experience and passion and commitment, I have had a long, demonstrated vision statement for economic growth around clean energy that is unique amongst potential candidates.”

Yet Inslee, a two-term governor, suffered a setback to his climate agenda last year when the oil industry funded a campaign to defeat a carbon emissions fee initiative Inslee supported. The measure was seen as a way to raise revenue as well as to help the state achieve ambitious greenhouse gas reduction goals.

The failure did not disrupt his larger message, however, particularly as he gears up to potentially run for the White House.

Inslee served more than a decade in Congress as well as the state legislature before getting elected governor in 2012 and re-elected in 2016 by a wide margin. He was chair of the Democratic Governors Association in 2018, a year that saw the party flip seven governorships, or the biggest gain for Democrats in more than three decades.

Clean energy and climate policies have been a longtime issue for Inslee. As a congressman, he wrote a 2007 book, “Apollo’s Fire,” about how America can reduce greenhouse gases and gain energy independence.

Inslee acknowledges other candidates have discussed climate change but issued a polite jab at potential 2020 presidential rivals: “Recognition is not enough; just checking a box is not enough. We have to have a leader who will make it a central, defining issue of their presidency.”

At the same time, the Washington governor has established himself as a visible foe of President Donald Trump on the environment and other issues. The Evergreen State has sued the Trump administration at least 33 times since January 2017 on cases involving the travel ban, family separation and public lands.

Inslee has slammed Trump for pulling out of the Paris climate agreement, and he said he believes Americans are ready for a president “with a vision of economic development centered on clean energy and the ability to defeat climate change. I think this is a very American moment because Americans are very optimistic, can-do people.”

The two-term governor has a record of taking on the oil industry, including last year opposing what would have been the country’s biggest oil-by-rail terminal. His administration also touched off a legal battle with six coal-producing states when it denied permits for a large coal export terminal on the Columbia River.

Inslee’s climate agenda suffered a blow last year when Washington voters rejected Initiative 1631, a carbon-fee measure the governor publicly backed. The opposition, led by oil companies, spent about $31 million to defeat the carbon tax plan while supporters only raised about half that amount.

“He’s kind of a square peg in a round hole because he wants to be a carbon warrior,” said Washington state Sen. Doug Ericksen, R-Bellingham. “Washington state already has an extremely low carbon footprint. We’re a hydro and nuclear state. We have one coal facility that is shutting down.”

According to the U.S. Energy Information Administration, the state of Washington is the nation’s hydroelectric power leader and ranks second lowest in retail electricity prices after Louisiana.

Ericksen said the governor’s “anti-energy policies don’t make sense here in Washington.” The Republican contends Washington is “one of the most regulated states in the country, and Jay Inslee has been a big part of that.”

For his part, the governor defends his record on business and said Washington’s “robust economic growth” is the fastest in the nation and continues to attract people from out of state.

In December the governor proposed five bills that he said will achieve “roughly the same carbon reduction” that Initiative 1631 would have achieved. It includes reducing the state’s greenhouse gas emissions to 25 percent below 1990 levels by 2035.

“There are multiple tools in the toolbox,” he said. “There are all kinds of different policies that can achieve carbon savings. We are going to need to embrace many, not just one or a few to be able to decarbonize our economy.”

Still, Inslee wouldn’t commit to supporting a national carbon tax or nationwide cap-and-trade auction mechanism similar to what California already has in place. However, he backs repealing the Trump tax cuts because he said that could help generate revenue to support more innovation and investment in clean energy.

Inslee said his vision on the climate issue is in keeping with both the peril that the planet faces with global warming as well as the promise of job creation from the transition to a lower-carbon economy.

“We have now an engine of economic job creation that is starting to rev up where clean energy jobs are the fastest-growing segment,” he said. “They are growing twice as fast the average job creation in the rest of the economy.”

Inslee blames climate change for the worsening wildfire problem in California and hurricanes in Florida. He recalled a visit in November to the Northern California town of Paradise where the Camp Fire destroyed more than 10,000 homes and killed 86 people.

He said the younger generation of Americans “totally gets” that the climate is changing and it’s become a very personal issue for some of them. The governor also pointed to polling indicating more Americans recognize the threat of climate change.

“You always skate to where the puck is going to be, not where it is right now,” Inslee said, borrowing a phrase from legendary hockey player Wayne Gretzky. “And two years from now, it’s going to be worse than it is now unfortunately [with regard to the climate crisis]. But the economic prospects will even be brighter because our [clean energy] jobs continue to grow by leaps and bounds.”