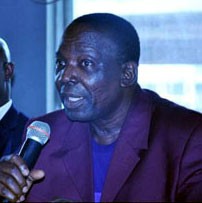 Former Super Eagles chief coach, Chief Adeboye Onigbinde, has extolled the virtues of the late national team striker, Teslim ‘Thunder’ Balogun, as his family marks the 45th  anniversary of the death of the soccer icon.

Onigbinde said the current strikers in the Super Eagles should imbibe the attitude of the late Thunder Balogun in front of goal while playing for the national team, especially as the Super Eagles face tough tasks ahead of the qualification for the Russia 2018 FIFA World Cup.

“Thunder Balogun was a great finisher in front of goal who helped Nigeria secure victories in top international games. This is the attitude the present Super Eagles players should imbibe while playing the remaining matches in the African qualifiers for the 2018 World Cup.

“He was a hero whose fascinating exploits motivated a lot of companies to float football clubs in Lagos. Aside from scoring vital goals with his legendary shots, he also scored goals with his perfect header. His level of fitness was always very high, as he trained very hard. When you see him training ahead of national team games, you would think, he was preparing for a long distance race. With good fitness, a player can do lots of great things with the ball. Poor fitness has been the problem of the present Super Eagles team.” The former Technical Director of the Nigeria Football Federation noted that Tesilimi Balogun was a fantastic footballer with bullet shots on both feet, stressing that he had great speed and dribbles effortlessly.

He said that a Ghanaian newspaper once described Teslim Balogun as the greatest centre forward Africa ever produced.

Onigbinde remarked that: “The late Tesilimi got his name ‘Thunder Bolt’ from the goals he scored during the 1949 Nigeria Challenge Cup final between the Nigeria Railways and the Marine FC of Lagos when he scored three goals in three minutes.