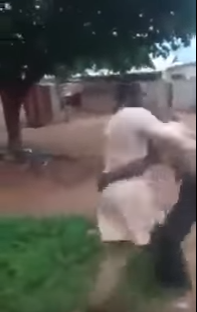 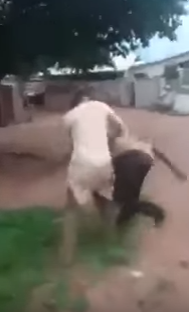 A hilarious video has surfaced of a pastor carrying out deliverance on a man alleged to be a mad man. The deliverance eventually turned violent with the alleged madman turning on the pastor and fighting him.

When the deliverance started, it seemed all the man wanted was to be left alone and as the deliverance progressed, the man kept moving away from the pastor but the pastor wouldn’t let him be and kept going back to him to push his bible in his face. 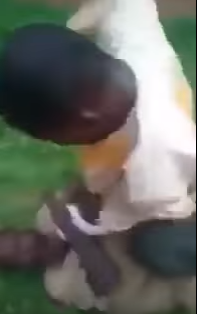 “The fire of the Holy Ghost… all over your body… mind renewal… may your mind be renewed, In Jesus mighty name,” the pastor is heard saying and tried to place his hand on the man’s head but the man pushed the hand away and tried to move away.

The pastor went after him, saying: “Take it. Take it. In Jesus mighty name.” he added: “Jesus Christ is your father. Who is your father?”
At this point, the man had had enough and challenged the pastor. “You, who is your mother?”
The man tried to walk away again but the pastor went after him and the mad man attacked. As they wrestled each other to the ground, the villagers can be heard laughing in the background.  It is not clear where or when the video was shot but it was just posted on social media today and is fast going viral.