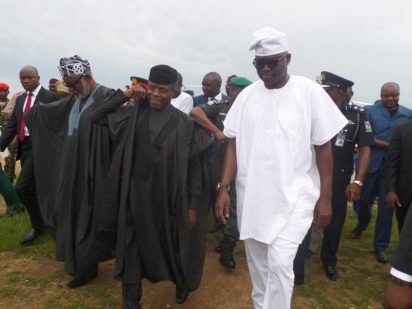 The Ekiti State Governor, Ayodele Fayose, has demanded full powers of the President for acting President Yemi Osinbajo to be able to tackle the menace of herdsmen.

He said this while expressing concerns about the attitude of the President Muhammadu Buhari-led All Progressives Congress Federal Government to the menace of the Fulani herdsmen in the country, especially in Benue State.

According to the governor, what is going on in Benue State is more like an organised pogrom and those responsible for the killings in the state must be arrested and prosecuted.

Fayose, in a press release on Saturday by his Special Assistant on Public Communications and New Media, Lere Olayinka, suggested that Osinbajo “should be allowed to function as the President so as to be able to deploy the instruments of the Federal Government to tackle the herdsmen menace.

“As it is today, it appears that Prof. Osinbajo does not have the full powers of the President,” he said.

Declaring support for the new law prohibiting open grazing in Benue State, Fayose said those opposed to the law were only doing so as part of their plot to undermine the land and people of the state and that they must be made to face the law.

He sympathised with the government and people of Benue State, advising the Federal Government to stop playing ostrich as regards the menace of the Fulani herdsmen.

“How can Nigerians embrace farming when those already in the farms are losing billions of naira worth of crops to destruction of their farmlands by the Fulani herdsmen and the Federal Government is not doing anything about it?”

Fayose described the Buhari’s government’s continuous silence on the alleged killing of harmless Nigerians by Fulani herdsmen as unacceptable.

“In May, 2016, the Miyetti Allah Cattle Breeders Association of Nigeria boldly told Nigerians that herdsmen killed over 1,000 Agatu people of Benue State then because over 800 of their cows were killed by Tiv youths. The man who openly made that comment was never questioned by the security agents.

“The same Miyetti Allah is now against the Anti-Open Grazing Law in Benue State, vowing to mobilise its members to resist the law and claiming that pastoralists like other citizens of the country have the right to move freely and to reside in any part of the country.

“Do pastoralists have rights to destroy other people’s farmlands, invade homes and rape people’s wives and daughters? Shouldn’t people who are into cattle farming be able to provide feeds for their animals,” he asked.