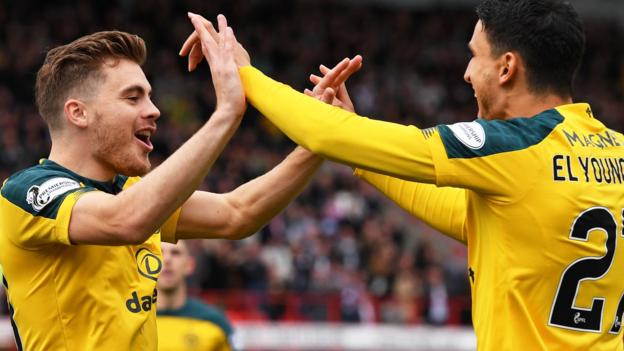 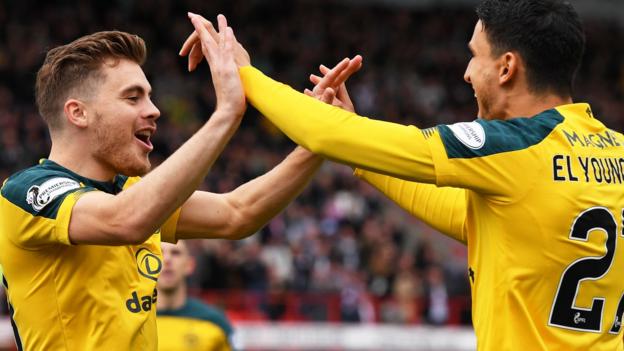 James Forrest converted debutant Mohamed Elyounoussi’s cross early in a first half dominated by the visitors.

Scotland winger Forrest crashed a shot off the crossbar after the break, but Hamilton grew in belief and intent.

They made life increasingly difficult for the champions and had a couple of half chances – but Celtic held firm.

Hamilton, who have now lost the past 10 meetings with Celtic, sit eighth with four points.

From a landslide to a trickle

Accies manager Brian Rice hoped for strength in numbers by barricading his backline with five defenders, who were protected by a layer of four midfielders, while George Oakley was handed a lonely shift up top on his own.

The attempt to stonewall Celtic lasted less than four minutes, though, as the champions chiselled a way through. A neat Odsonne Edouard lay-off set Elyounoussi free down the left and his low cross was expertly tucked home at the near post by Forrest – his seventh goal of a productive season so far.

But what looked like a landslide soon turned into a trickle as Celtic failed to cement their superiority with further goals.

Like his team, Elyounoussi – a £17m winger on loan from Southampton – began impressively then lost his way.

Despite possession stats of 73% in favour of the visitors, home keeper Owain Fon Williams’ gloves went untouched until he produced a terrific save to tip Forrest’s thudding left-foot drive on to the underside of his bar and away to safety.

The one-touch passing and combination play from Lennon’s men, who were so impressive in their Old Firm win at Rangers before the international break, was easy on the eye but relatively simple to repel as Hamilton kept themselves in the game.

The hosts were in nosebleed territory when Blair Alston mustered their first shot at goal just shy of the 40-minute mark, the midfielder’s hooked drive over his shoulder landing straight in Fraser Forster’s arms.

But they improved markedly in the second half, fraying Celtic nerves with a series of raids forward. Alex Gogic nodded wastefully wide inside the box when a free-kick was floated on to his head and Alston was only a couple of yards too high with an effort from the edge of the box after a surging run from Adrian Beck, on for his debut.

Celtic were made to sweat until 20 seconds from the end of added time, when Ogkmpoe narrowly failed to connect with Scott McMann’s driven ball across goal, but ultimately Accies’ spadework was all in vain.

Man of the match – Alex Gogic

BBC Scotland’s John Barnes at the Fountain of Youth Stadium

There was a queue of contenders in a first-half Celtic display full of slick passing. Forrest and Ryan Christie were the most prominent but they and their team-mates failed to maintain the tempo and dominance.

That was down to Accies imposing themselves more on the game. The influence of Gogic in the holding role in central midfield caught they eye, as did the youthful exuberance of Lewis Smith.

But being the cushion in front of his central defenders, breaking up play and trying to get Accies moving forward, was enough for Gogic to get the nod.