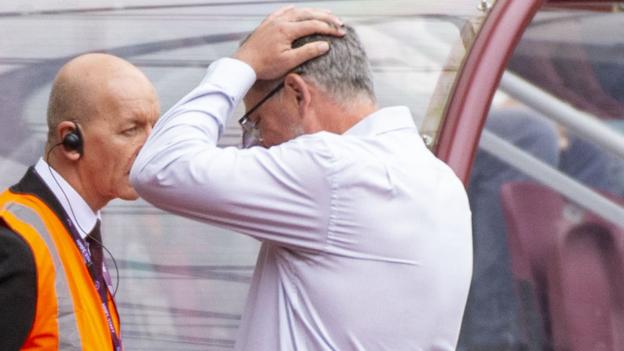 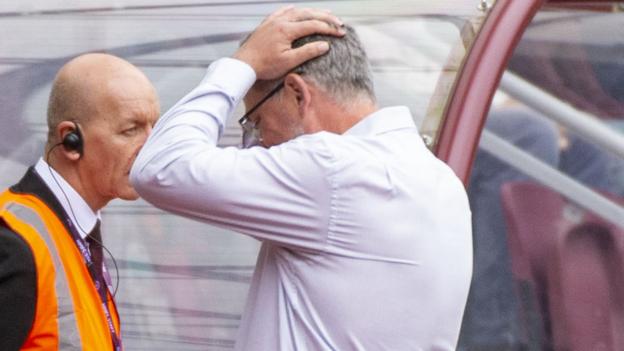 Motherwell climbed to third in the Scottish Premiership and increased the pressure on Hearts boss Craig Levein by sending his team – now without a win in 14 league games – bottom of the table.

Uche Ikpeazu nodded Hearts back into the contest on 61 minutes, but Jermaine Hylton scored an opportunistic third.

Ryotaro Meshino struck with six minutes left but the hosts could not level.

After the game, angry home fans gathered in protest outside the main stand, some chanting “sack the board” and calling for Levein – who is also director of football – to be dismissed.

Hearts have only two points from five top-flight matches this term and last won a league match in March. They face struggling rivals Hibernian next Sunday in a seismic Edinburgh derby showdown in Leith.

This was a third successive victory for Motherwell since losing to Hearts in the League Cup last 16, and the third game in a row they have scored three goals.

Coming into this game, Levein was already under immense pressure, his side winless in 13 league outings, fragile and joint-bottom of the table despite serious summer investment. Fans howled profanities at the manager after Hearts twice blew a lead here against Hamilton Academical last time out and they would soon be howling again.

How he needed a rousing start and a compelling performance to get Tynecastle roaring encouragement, not fury. At its finest, the stadium is a claustrophobic den of fear and tumult, but lately it has been a place of misery for Hearts. In eight league matches, there has been a single home victory.

It didn’t take long for the anguish to begin to bubble in the stands. Then, with 20 minutes gone, it detonated. Gallagher’s brilliant curler from the left angle of the box was tipped over the bar by Colin Doyle, and from the resulting set-piece, the big defender swatted away Sean Clare and slammed his header home.

It was an emphatic finish but also a moment of desperate limpness at the heart of the home box. Levein had spoken in midweek about how hard his players were working to improve their defence. The softness of the opener was terrible.

Hearts had much of the ball in a foul-ridden first half – there were 21 in the opening period alone – but did precious little with it. Clare squandered an excellent chance to atone for his slackness when Ikpeazu thundered into the box and found Steven Maclean, who neatly teed up the midfielder, but his shot, much like his defending, was meek.

Motherwell brought more rage when Liam Donnelly struck the bar, and Devante Cole, then Liam Polworth, were sent scampering through on goal on the counter, but each were thwarted by the onrushing Doyle. The home players trooped off at half-time with boos chasing them up the tunnel.

If Levein demanded a response at the break, he didn’t get one. Instead, he got more sloppiness. Ikpeazu’s pass trickled behind Loic Damour, Seedorf gleefully plundered the ball and galloped to the edge of the box before rocketing an unstoppable shot in off the underside of the bar. Hearts could have had Manuel Neuer in goal and the German wouldn’t have got near it.

To their credit, Hearts kept at it. Damour slid in Meshino, the diminutive Japanese skipped beyond one challenge and when his shot was saved by Mark Gillespie, Ikpeazu used all of his brawn to nod the looping ball in.

At last, Hearts had the impetus they desperately craved. Then came a bonkers phase of play that sickened them anew.

Conor Washington raced through on goal left of centre but Gillespie blocked his flicked effort. Motherwell hoofed it away. Back went Clare. The situation looked perfectly under control. Yet as he tried to usher the ball back to Doyle, Clare was hopelessly eased aside by Hylton. The substitute, on for less than a minute, left Clare and Doyle on their backsides before curling into the unguarded net.

For a team with so little to cheer them, and fielding so much ire from their support, Hearts did not wilt. They ended the game with 10 men when Washington limped off injured with all three substitutes made and still they found a way to make the final moments interesting.

Meshino jinked clear of the laboured and flailing Donnelly and his shot, concealed by a couple of bodies, went through Gillespie. But perhaps inevitably, they couldn’t serve up a redemptive finish. In fact, Motherwell should have killed it at the death when Christopher Long hared clean through and Doyle beat his shot over the bar.

At full-time, the boos rumbled again. They’re becoming as familiar a sound as The Hearts Song in these parts. More worrying for Levein and owner Ann Budge was the swelling throng of baying fans outside in the aftermath. The manager is determined to soldier on, but it is hard to see how he can win back so many disaffected and incensed supporters.

These are grim times for Hearts. And across the city, for Hibs and Paul Heckingbottom, too. After losing to Kilmarnock, they have only two more points than their floundering rivals. Next weekend’s clash of two struggling Edinburgh giants could have grave consequences for the manager who loses it.

Man of the match – Liam Polworth

Motherwell provided several strong contenders including Gallagher, who again looked composed at the back, but he was edged out by Polworth’s influence in midfield. Linking expertly with Allan Campbell and Seedorf either side of him he was the driving force in Motherwell’s success.

Motherwell manager Stephen Robinson: “We should have made it easier on ourselves as we had more chances, but it was a terrific performance.

“Declan Gallagher must be very close to a Scotland call-up and he just keeps getting better. We are not going to get carried away and just try to keep building and developing.”

Hearts manager Craig Levein: “I’m not concerned about the effort in the game, that was plain for everybody to see. I just feel they’re a bit pressurised just now and a bit lacking in confidence.

“Sometimes the pressure gets to people in different ways. One of the ways is they don’t show for the ball as often as they should do, which then leaves the player on the ball with less options. So we need to get over that, we need to go down to Easter Road next week and put on a good performance.”