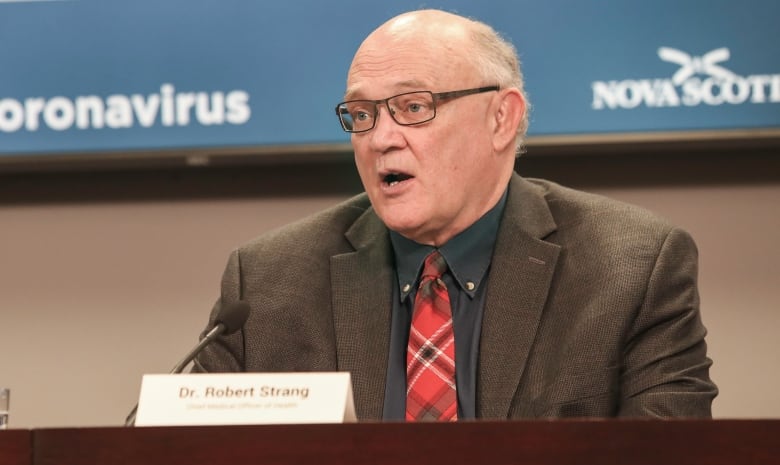 Nova Scotia’s premier has clear, harsh words for the small group of people who recently protested outside the province’s top doctor’s home: “grow up.”

On Friday evening, Premier Tim Houston released a video message about a small protest outside the Fall River home of Dr. Robert Strang, the province’s chief medical officer of health, earlier that day.

“There isn’t language harsh enough to condemn these actions,” Houston said in the video.

“I would encourage you all to grow up and think of others.”

Houston said he knows there have been an increased number of protests in Nova Scotia related to proof-of-vaccination policies and other health measures around COVID-19, similar to those across Canada.

While Houston said he believes in the right to free speech and protest, he said there are proper places to do it. The legislature is a fair place, Houston said, as is outside his own office.

Beginning Oct. 4, Houston’s PC government has said people looking to participate in non-essential activities, such as going out to restaurants, bars, movie theatres or fitness facilities, will need to show they’re fully vaccinated against COVID-19.

Strang and Houston are not calling the system a vaccine passport — a measure introduced in other jurisdictions that has sparked debate over privacy and personal freedom versus public health. However, there doesn’t appear to be any difference between a vaccine passport and the Nova Scotia policy.

Everyone has the right to vocalize their issues with government decisions, Houston said, but going to the personal residence of the man giving public health advice to the government is “completely unacceptable.”

Houston said the recent rallies outside hospitals have also been unacceptable, and now “we reached a new low” when protesters took to Strang’s home.

“Dr. Strang deserves not to be harassed, yelled at or scared to be in his own home. His family and neighbours deserve the same,” Houston said.

“To those of you protesting, your views and opinions belong to you. You are doing this for yourselves. The doctor who keeps us all safe and healthy is doing his job for all of us.”

When asked about the rally outside Strang’s home, RCMP Cpl. Lisa Croteau said Saturday that police were on scene to monitor the situation starting at 4 p.m. but no issues occurred and no arrests were made. She did not have details on when the crowd left.

Croteau said police made sure the “small group” didn’t block traffic, go onto any private property, or disturb people in the area.

She said people are allowed to protest as long as they are in a public location and don’t interfere with traffic, people’s enjoyment of their property, or break noise bylaws.

When asked if police had a message for protestors, Croteau said the best advice she would give is to protest “more in a public place, in front of a public building instead of in a residential area.”