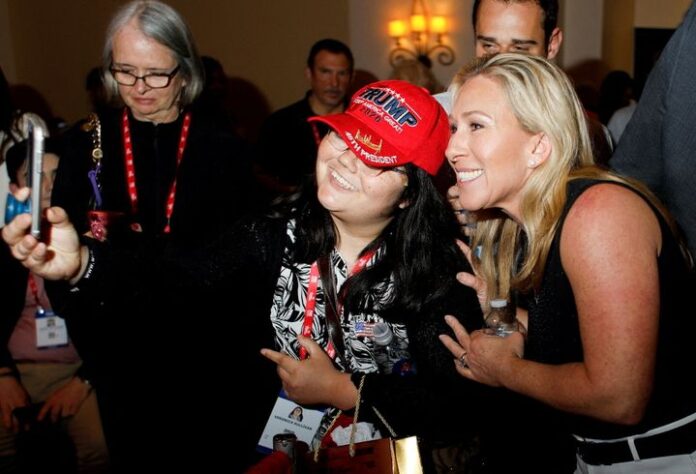 Fuentes, an antisemite and racist who attended the deadly 2017 white supremacist rally in Charlottesville, Virginia, and who was recently subpoenaed for his involvement in the Jan. 6, 2021, attack on the U.S. Capitol, excitedly introduced Greene as the featured speaker from behind a lectern inside the Marriott Orlando World Center, according to a livestream of the event. (HuffPost was denied entrance to AFPAC.)

In her speech, Greene referred to the assembled AFPAC crowd — among them prominent right-wing extremists who have been photographed giving the Nazi salute and reciting the infamous “14 words,” a white supremacist slogan — as “canceled Americans.”

“You’ve been handed the responsibility to fight for our Constitution and stand for our freedoms, and stop the Democrats who are the communist party of the United States of America,” Greene said.

Her speech was immediately followed by a series of virulently racist and homophobic diatribes from prominent extremists.

“They want to replace you,” said Vincent James Foxx, a former propagandist for the white supremacist street-fighting club Rise Above Movement. “Western white culture is the majority culture, to which even non-whites assimilate into today — and they’re better off for it.”

Then far-right podcaster Stew Peters called for the execution of Dr. Anthony Fauci, director of the National Institute of Allergy and Infectious Diseases, whom he falsely blamed for causing the coronavirus pandemic.

“Tony Fauci literally unleashed a bioweapon on the world. Why is this man running around free instead of hanging on the end of a noose somewhere?”

Greene’s presence at AFPAC underscores the thin line separating the Republican Party from the white nationalist extremist movement in America. Greene, after all, was not the only public official who spoke at AFPAC on Friday night.

Rep. Paul Gosar (R-Ariz.), who spoke at last year’s AFPAC, made an appearance via a pre-recorded video, as did Arizona state Sen. Wendy Rogers and Idaho Lt. Gov. Janice McGeachin, both Republicans.

Greene is also scheduled to speak Saturday morning from the main stage of the Conservative Political Action Conference (CPAC), the pre-eminent annual gathering of the conservative movement in America, a few hours before former President Donald Trump is set to speak from the same stage.

HuffPost also spotted Greene at CPAC on Friday — only a few miles from the site of AFPAC — where she was treated like a celebrity, posing for photos and conducting interviews with right-wing media outlets.

Last year, Greene was stripped of her committee assignments for promoting violence against Democrats.