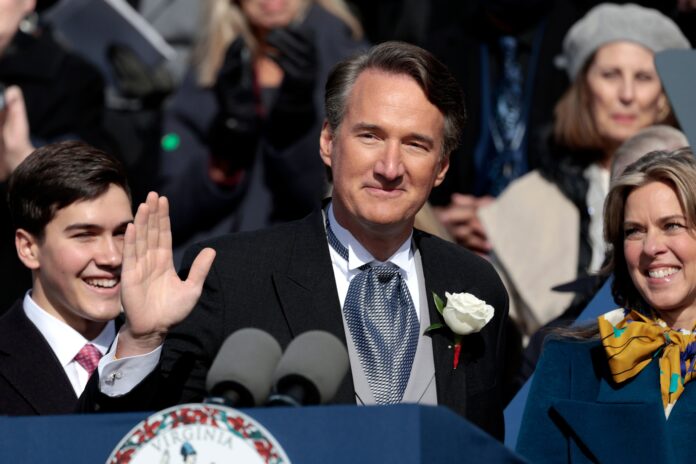 Republican Glenn Youngkin, a former private equity executive who has never before held public office, signed 11 executive orders on Saturday just hours after he was sworn in as the 74th governor of Virginia.

He also withdrew the state from the Regional Greenhouse Gas Initiative, which is aimed at reducing carbon pollution in conjunction with neighboring states, and declared Virginia “open for business.” Youngkin has named Andrew Wheeler, Donald Trump’s former chief of the Environmental Protection Agency, to the state’s top environmental post.

The string of orders seemed to be an about-face on Youngkin’s message of bipartisanship and optimism.

He pledged to “restore trust in government and to restore power to the people” at his swearing-in ceremony in Richmond.

“No matter who you voted for, I pledge to be your advocate, your voice, your governor,” he added. “It’s a new day in Virginia.”

Youngkin led the closing prayer himself.

“Father, we invite you into the next four years,” prayed Youngkin, the first Republican governor of the state since 2009. “Bring Virginians together.”

But Virginians were already divided over his new orders.

Also Read: Mom Of Teenager Shot By LA Police: She ‘Died In My Arms’

“The war they have declared on Black history is dangerous to say the least,” state Del. Lamont Bagby (D), head of the Virginia Legislative Black Caucus, told reporters, The Washington Post reported. Bagby was referring to critical race theory, which provides a teaching framework to examine slavery in America.

Youngkin will have to negotiate business with a Republican-majority House of Delegates and a Democrat-controlled state Senate.