Global tax accord could earn Canada up to $4.5 billion per year, says Freeland 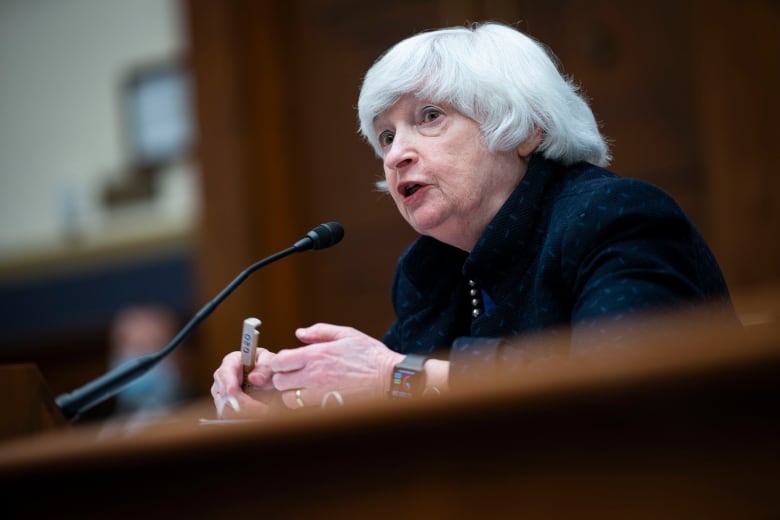 Finance Minister Chrystia Freeland says Canada stands to collect as much as $4.5 billion dollars a year through a landmark deal involving 136 countries that will require the world’s largest corporations to pay more in taxes.

It’s the first time she’s released a revenue estimate from her department since the deal was reached a week ago. It comes just as some critics of the deal are suggesting Canada would do better if it went ahead with the digital services tax set out in Freeland’s April budget.

“There are still some final details being hammered out, so the numbers I’m giving you are not exact,” Freeland said in an interview with CBC’s The House airing Saturday.

“Having said that, the best calculation the Department of Finance has right now is that when this deal comes into force, it will be worth $4.5 billion in additional revenue for Canada every year.”

Under the agreement reached at the Organization for Economic Cooperation and Development, many of the world’s biggest multinational companies will be required to pay a minimum corporate tax rate of 15 per cent in 2023.

Starting in 2024, the agreement will also require multinational companies — particularly digital giants such as Amazon, Facebook and Google — to pay taxes on profits in the countries where they are earned, even if they have no physical presence there.

Critics of the deal have argued Canada would raise more money under Freeland’s proposed 3 per cent tax on revenues from those digital services. That tax, which was to kick in next year, is being put on hold as talks continue on finalizing the global deal.

The parliamentary budget officer estimated this spring that the Canadian tax would raise $4 billion over five years.

Freeland said the math clearly works in Canada’s favour under the global deal.

“Our own calculation, which we did put into the fiscal framework on the DST, was that that would bring in about $700 million a year. So this OECD deal, just purely on the numbers, is a much better deal for Canada.”

Deputy Prime Minister and Minister of Finance Chrystia Freeland explains why Canada pushed for a new global tax agreement and what effect it will have here. 9:06

Freeland said that the proposed digital services tax will be brought in, and applied retroactively, if the global deal ends up not being implemented.

“I have put in place an insurance policy for Canadians,” she said. “My hope and intention — and I’m going to put my shoulder to the wheel and work really, really hard for this — is that this international deal happens because it is overwhelmingly the best outcome for Canada and Canadians.”

Freeland isn’t alone in praising the global deal. G20 finance ministers meeting in Washington this week endorsed it, setting the stage for formal ratification by the leaders of the world’s largest economies at the summit later this month in Rome.

A raw deal for low-income countries?

“This agreement will establish a more stable and fairer international tax system,” the ministers said in a media statement after their meeting.

But critics warn that the terms of the agreement will disproportionately benefit the world’s wealthiest nations, where most multinationals have their headquarters.

“So with all of these crises, to deny low- and middle-income countries a fair share of the global tax pie is unjust.”

But Freeland and U.S. Treasury Secretary Janet Yellen insist that the deal, with its minimum 15 per cent corporate tax rate, will end what they call a “race to the bottom” driving countries to compete against each other to attract large multinationals by offering lower and lower corporate tax rates.

“The only losers from this deal are big multinational companies who are currently using globalization and the loopholes it has created to avoid paying taxes,” Freeland told The House.

Freeland was less specific when asked how the extra revenue will be spent in the years ahead.

Freeland refused to say if the extra money from the tax accord would be used to pay down debt, or if she might follow the example of another Liberal finance minister — Paul Martin — who divided budget surpluses between debt repayment and tax cuts.

“I think the approach our government is taking to the fiscal situation in Canada is to say we made a commitment in the April budget to have a steadily declining debt to GDP ratio, and we continued to show that commitment in the platform on which we campaigned,” she said.

The Liberal government made some expensive commitments during the recent election campaign, including a $30 billion investment in a national child care program, money for social housing and funding to reduce greenhouse gas emissions.

And there’s a more immediate concern. Many of the federal government’s emergency relief programs, including wage and rent subsidies and the Canada Recovery Benefit, are set to expire next week.

Freeland said she’s been discussing the future of those programs with economists, businesses and labour leaders as the Canadian economy shows signs of stronger growth and job creation than anticipated, despite a fourth wave of the pandemic.

“I have a stack of papers in front of me about precisely this issue,” she said.

Canadians will have to wait until next week for a decision on whether some — or any — of those programs will be extended.