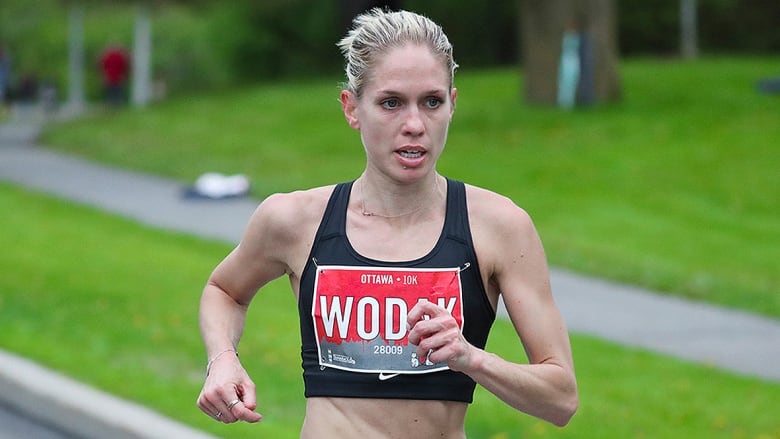 Five weeks ago, Natasha Wodak thought she should resume training with the Toronto Waterfront Marathon 10K fast approaching. But mentally she wasn’t ready, coming off a long Olympic marathon build and exhausting 13th-place finish in the extreme heat of Sapporo, Japan.

The 39-year-old took two weeks off after the Summer Games and spent much of the next 14 days only jogging. Feeling tired, Wodak ended her first post-Olympic workout soon after it began. She wasn’t motivated.

“In retrospect, it probably would have been a better idea for me not to put this [Toronto] race on my calendar because I didn’t feel ready to start training when I did,” Wodak said over the phone recently from her Vancouver home. “To wrap my head around racing another Canadian national championship was a lot.

“I thought, ‘Let’s give it a few weeks,’ and [two weeks ago] my legs finally felt like they were back under me.”

In August, Athletics Canada, Run Ottawa and Canada Running Series announced the Canadian 10K Championships, usually held in the nation’s capital, would move to Toronto this year as part of the Toronto Waterfront Marathon. It is the first in-person race for CRS since the pandemic began.

Wodak acknowledged she wouldn’t be in her best racing shape for Sunday’s event along Toronto’s lakeshore but the competitor in her isn’t allowing the national 8K record holder to be counted out. She’s excited for the chance to defend her title after winning the national 10K in 32 minutes 31 seconds in 2019 and last year’s virtual women’s race in 32:41.

The elite women start at 8 a.m. ET and men 13 minutes later, with 5,000 other participants following in waves of 100. The competition will be live streamed free of charge at www.stwm.ca, Facebook and YouTube starting at 7:30 a.m.

Wodak, who is hopeful for a top-three finish, believes some of the competition is in better fitness, including Scottish runner Sarah Inglis — a permanent resident of Langley, B.C. — and Vancouver resident Leslie Sexton, who won her first Canadian 5K Championship in September, clocking 15:37 in the virtual event.

Wodak said training improved after she dropped “unreal” expectations such as striving to lower her personal-best time of 31:59. She has also been motivated by a visit from fellow Tokyo Olympian and distance runner Andrea Seccafien, who has been unable to return home to Melbourne because the Australian border has been closed since March 2020 to all non-permanent residents in a bid to contain coronavirus.

On a morning run last Saturday, they talked about the women’s national 10K record of 31:44 held by Lynn Kanuka, Wodak’s coach.

“I’m like, ‘It’s Lynn’s last one. Don’t take it away from her.’ We both said we’ve got to find a fast 10K and go after it. I want to get it before Andrea,” said Wodak, who held the Canadian half marathon mark for two weeks before Seccafien broke it on Feb. 2, 2020.

Evan Dunfee of Richmond, B.C., who earned Canada’s first Olympic race walking medal in 29 years this past summer with bronze in the men’s 50 km event, has challenged his brother Adam to a race on Sunday. But Adam plans to run the course while Evan walks in their first race since 2017.

“We’re thrilled to … bring back a major in-person road race before the end of 2021,” CRS race director Alan Brookes said in a news release. “It is an important sign that we are on the way back. … We hope that the race will be an enormous inspiration for Canadian running.”

Going forward, Wodak isn’t sure of her race plans but mentioned the B.C. cross-country championship on Oct. 23 at Beaver Creek just outside Victoria, one month ahead of the Canadian championships on Nov. 27 in Ottawa.

‘Emotionally, I was in a really strong place’

“I’ve had bad arthritis in my feet and haven’t put on cross-country spikes in over a year and a half,” said the two-time national champion. “I’m a little nervous about running on an uneven surface. I might do B.C. and see how it goes.”

Placing 13th in 2:32:41 went beyond Wodak’s expectations for her Olympic marathon debut “and is going to be one of, if not, the greatest moments in my life.”

She recalled spending “hours and hours” discussing a race plan with 41-year-old teammate Malindi Elmore of Kelowna, B.C., who was confident they could finish inside the top eight. Elmore was ninth in 2:30:59 while Wodak set an A goal of top 16 and a B goal above her pre-race rank of 26th or 27th.

“Emotionally, I was in a really strong place, unlike I’ve ever been [before the Olympics],” said Wodak, who was 22nd on the track over 10,000 metres at her 2016 Summer Games debut in Rio. “[Back then] I thought if I don’t run well, I’ll be embarrassed, and it will have been all for nothing.”

Before Tokyo, Wodak reminded herself, “No matter what happens, my friends and family will love me. I will wake up tomorrow, the sun will rise, and life will go on.

“Had I not run well, they would have been incredibly proud of me for the [marathon] build I did, for persevering through COVID and getting through the heat. I never believed that until the last few years. When you do, it takes the pressure off.

“When you get back from the Olympics it’s like a weight has been lifted,” continued Wodak, who ran a 2:26:19 PB last December at The Marathon Project in Chandler, Ariz. “You just want to breathe and relax. You need to give your brain a break from the constant focus [of training and racing]. I really did let myself do that and just enjoyed the celebration.”