No safe injection site, homeless shelters force those in need in Dryden, Ont., to help each other 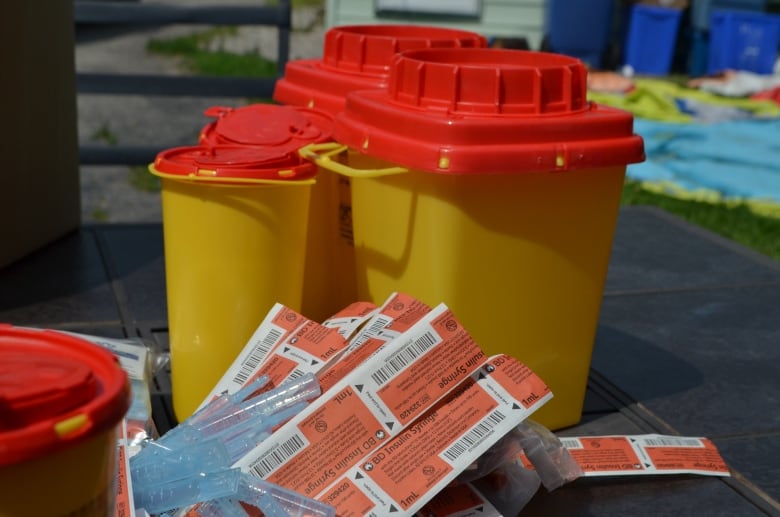 There are also heightened calls for evidence-based solutions, like creating safe consumption sites, to help vulnerable people in the city of 8,000, located 350 kilometres northwest of Thunder Bay.

But when someone like Shauna Pinkerton, who has lived with addiction for decades, brings that conversation to the people charged with making those decisions, she runs into the same sort of answer.

“They’re like, ‘Here’s a five-year community wellness plan that we’ve put together, so in the next five years, you guys should be able to see some progress,'” Pinkerton said.

“We don’t have five years.”

The gulf between those who say they need action and help now and those charged with making it happen is ever present in Dryden, and it’s generating intense frustration for people who are watching their friends die.

Pinkerton pulls a paper bag out of her garage.

She’s about to visit a few houses in the city where she knows people gather to use drugs like fentanyl or crystal meth, and she helps them because she’d rather they use clean supplies to prevent spread of disease.

Armed with multiple kits with the opioid-overdose rescue drug naloxone, she often stays at the houses while they’re using to watch out for their safety and any signs of danger.

Pinkerton feels obligated to help because there are no supervised, safe drug-use areas in the city, and drug-related deaths are on the rise.

The safest place for an addict to be using right now is with other addicts because they know how to take care of you.– Shauna Pinkerton

“I hate to say it, but the safest place for an addict to be using right now is with other addicts because they know how to take care of you,” she said.

There are days, Pinkerton added, that she walks into a house and immediately has to administer naloxone. Within an hour, she’ll have to administer the medicine several other times.

Seventeen people died in 2020 from an opioid overdose in the area covered by the Northwestern Health Unit, which includes Dryden among 19 small municipalities and 39 First Nations.

Pinkerton said Dryden is in serious need of a safe consumption site — where people can inject or consume substances in a clean environment under the supervision of trained staff.

Lunny said there’s a growing body of research indicating safe consumption sites work best when they are connected to other services.

“So in that same location, you can use a substance and know you won’t die from doing it. But there’s also a social worker there, and there’s treatment right upstairs, or there’s someone to help you get connected with housing.”

But to actually make a safe consumption site a reality, Lunny said, a number of things have to align.

The relevant partners need to come together, and “there needs to be the energy behind it,” Lunny said.

She said another barrier is relevant agencies simply don’t have the resources or staffing to get the ball rolling.

“With COVID, we have very small offices, and when you have to pull every nurse you have into case and contact management or into COVID clinics … right? Sometimes there’s other things that have to take a priority.”

Lunny said a feasibility study needs to be conducted before any plans can be made for a safe consumption site. She said the Northwestern Health Unit is looking into getting such a study going, but she couldn’t give a timeline for when it may begin.

Mikey Verbonac lives in a one-bedroom apartment off a main street in downtown Dryden.

He knows how difficult it can be to find a safe spot to sleep when you don’t have a place to call home — he’s done that before — so he often makes space on the floor where people can rest.

“When you gotta get up to use the washroom, you gotta crawl over bodies because I got nine, 10 people here sometimes at night,” he said.

The most recent count by the Kenora District Services Board, in 2018, found 67 people in Dryden were experiencing homelessness, and there are no shelters for those individuals. Verbonac said they need a shelter, and with winter approaching, the city needs it now.

Henry Wall, chief administrative officer of the Kenora District Services Board, agrees with Verbonac in principle, but said the city needs a drug strategy before it can set up a shelter.

“If we were to develop an emergency shelter, say tomorrow, we’re going to have a significant human services failure.”

He pointed to the shelter in neighbouring Kenora, which the district services board temporarily closed just six months after it opened in February 2019 because of concerns about drug use, and safety of both staff and the people using the shelter.

“It’s going to take us time to plan to do it right,” he added, but couldn’t say how much time is needed.

Police and emergency medical service (EMS) costs have also risen dramatically over the last decade to address the social and health crises spurred by growing addiction and homelessness, which Wall said makes it all the more important to consider how to support people as cost effectively as possible.

‘Political will’ needed to get supports

This wait-and-see approach by the people responsible for getting supports in place for those living with addiction and homelessness is frustrating, said Sarah Kennell, national director of public policy for the Canadian Mental Health Association.

“Using the excuse of ‘we need a strategy in place’ is, to me, an insult to the work that’s been done in other parts of the country … where we’re seeing really innovative, cost-effective approaches to service delivery that can ramp up on a dime,” Kennell said.

Safe consumption sites and shelters have been popping up across Canada, she said, and their best practices can be adopted and scaled to other rural locations.

“I don’t think it’s a lack of knowing what to do or not having a strategy or approach in place,” Kennell said.

“It does come down to political will and resources.”