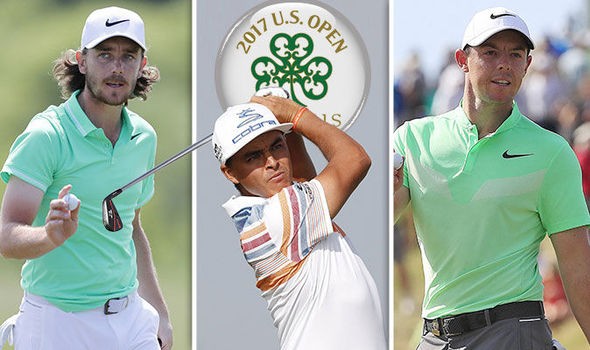 Americans Rickie Fowler and Brooks Koepka were slugging it out at the top of the US Open leaderboard on Friday, opening a two-shot lead on field midway through the second round.

Fowler, who held a one shot advantage overnight, cruised through an error free front nine that included two birdies.

But Koepka was even better, carding four birdies on his bogey-free outward nine as both players settled in at nine-under with nine to play.

Sitting two shots back with the clubhouse lead is Paul Casey who survived a rollercoaster round that included a gut-wrenching triple-bogey and a thrilling run of five straight birdies.

The up-and-down round ended with the Englishman signing for one-under 71 and walking into the clubhouse level with Fowler, who had yet to start his round.

Lurking three off the pace are American Brian Harman and Englishman Tommy Fleetwood both with holes to play.

Few have had a more hair-raising ride at a major than Casey, who playing the Erin Hills back nine first opened with a birdie at the 11th before plunging down the leaderboard with a triple-bogey at 14 and a bogey 15, only to rocket back into contention with five consecutive birdies.

“Not every day you enjoy a round of golf with an eight on the card, but I’m a pretty happy man,” said Casey. “It was a bit of a roller coaster.

“I guess it’s where you get through a US Open or any major without some kind of hiccup.

The Englishman began the day one shot behind Fowler and quickly joined the American at the top of the leaderboard.

But his stay was short-lived. The world No 14 found himself in trouble when he flew his approach out of rough over the green into the deep fescue at the par-five 14th, and needed five more strokes to get in the cup.

A rattled Casey immediately added another bogey to extend his miserable run before hitting the turbo-charger and firing off five consecutive birdies.

Masters champion Sergio Garcia returned a tidy one-under 71 to leave the Spaniard at three-under 141, in contention for a second straight major.

Some of the world’s top-ranked players and pre-tournament favourites will miss the cut.

World No 2 Rory McIlroy, who has been sidelined for a month with rib and back injuries, followed his opening round 78 with a one-under 71, courtesy of four birdies over his final six holes.

But it was too little too late for the Northern Irishman who remains anchored near the bottom of the leaderboard at five over.

Jason Day, the world No 3, will also have the weekend off after a 75 left the Australian at 10 over through two rounds.