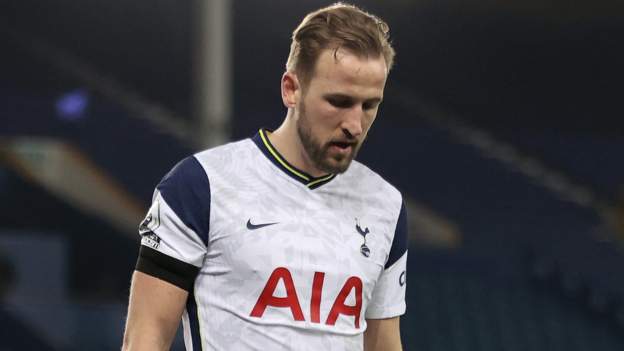 As speculation around Kane’s future increased external-link on Monday evening, the club issued a statement saying: “Our focus is on finishing the season as strongly as possible. That’s what everyone should be focused on.”

Sources have told BBC Sport that the England captain, who has a contract until 2024, has not handed in an official transfer request or directly communicated a wish to move.

It is understood that Kane thinks he has a gentleman’s agreement that would allow him to leave the club this summer.

The Premier League’s top scorer this season is known to be frustrated after another trophy-less campaign at Spurs, which included the sacking of manager Jose Mourinho in April just before they lost the Carabao Cup final to Manchester City.

Kane has still not won a trophy in his club career, and it is thought he has decided he needs to move to satisfy his professional ambitions.

Asked on Tuesday whether Kane had asked to leave, interim manager Ryan Mason said: “No, not that I’m aware of. All of my conversations with Harry have been about the game.”

Spurs host Aston Villa in the Premier League on Wednesday.

Last month Kane described this season as “disappointing” and reiterated his desire to win trophies after the League Cup defeat.

BBC Sport has been told conversations with the club resulted in a plea for him to ‘become a Francesco Totti’ – the Italian World Cup winner who rebuffed numerous transfer offers to spend his career at Roma.