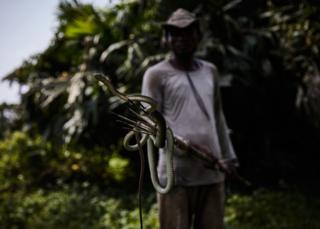 Amid the swathes of forest that cover the country, and behind the headlines of war and Ebola, the Democratic Republic of Congo is at the forefront of a hidden health crisis.

With vast jungles home to numerous species of venomous snakes, DR Congo is a hotspot of injury and death from snakebite envenomation, an issue highlighted by the World Health Organization (WHO) and Médecins Sans Frontières as a neglected crisis for Africa.

Photographer Hugh Kinsella Cunningham has been documenting the issue and capturing close-up portraits of some of the world’s most dangerous snakes, for the Pulitzer Centre on Crisis Reporting.

Fisherman Patrick Atelo displays a live mamba on the River Ruki. The snake was spotted close to the village and, because of the mortality rate of bites, snakes are feared and often killed as soon as they are seen.

As many as 2.7 million people are poisoned by snakes every year, resulting in between 81,000 and 137,000 deaths, with many more amputations and permanent disabilities, according to a recent WHO report.

Years of conflict and political corruption have crippled much of DR Congo’s infrastructure and mean that stocks of anti-venom are scarce or nearly impossible to distribute. With an overlap between the prime habitats for venomous snakes and a rural populace, a lack of access to specialised health care can be deadly.

Snakes are often caught in the fishermen’s nets on the Congo River, so care is taken when checking to see if there has been a catch.

Cunnigham also photographed the snakes close up, such as the forest cobra above.

“By maintaining a calm environment and by remaining very still on the ground, I was able to make portraits a couple of feet from the snakes,” he says.

Francois Nsingi, the technician from the DR Congo Anti-Venom Centre, ensured the most dangerous species weren’t stressed or ill at ease.

“The strongest portraits were made when the snakes investigated the camera lens. And I felt it was important to photograph them not in a cage or behind glass but moving free in the makeshift studio, just as they would in the wild,” Cunningham says.

“It was incredible to make the snakes more of the story than just an unseen threat – but the privilege of working with Francois, with his years of experience and care for snakes, made it clear that an unexpected encounter would be very dangerous.”

Mambas have extremely dangerous neurotoxic venom – death can result in as little as two hours after being bitten.

A cobra that has entered a fishing trap belonging to fisherman Shadrack Ifomi. He has been fishing the river systems his whole life and has been bitten several times but fortunately by smaller species of vipers only.

Working amid undergrowth results in large amounts of snakebites, as well camouflaged vipers and cobras can be disturbed and deliver a defensive strike.

Landowner Monique was bitten by a snake while walking to inspect her properties.

A traditional healer in the western city of Mbandaka shows her remedy for snakebites. Herbs and a snake’s head are ground into powder then burnt before being rubbed into small razor wounds made on the arms of a snakebite victim.

These remedies potentially alleviate some minor symptoms or provide a placebo effect but can also cause harm. For instance, making small cuts with a razor to rub a charred substance (including powdered snake’s head) into the wounds can lead to infection.

The herbs are collected by healers such as Bienvenue Efete, pictured below.

Dr Anaurite Nyaboleka, at the Tabe medical clinic, Mbandaka, has little or no access to anti-venoms and is left providing symptomatic care for snakebites.

All photographs © Hugh Kinsella Cunningham with the support of the Pulitzer Centre. 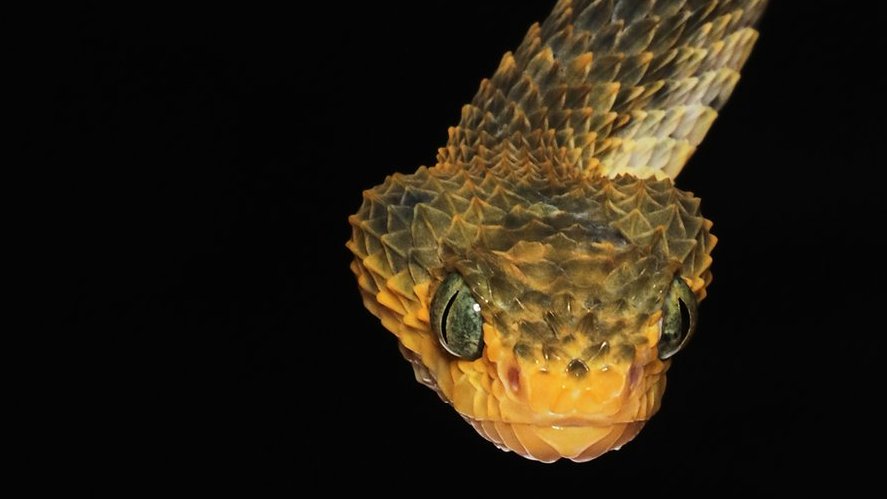