A bridge made of grass 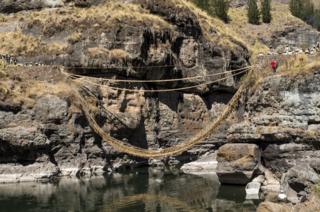 Every year the last remaining Inca rope bridge still in use is cast down and a new one erected across the Apurimac river in the Cusco region of Peru.

The Q’eswachaka bridge is woven by hand and has been in place for at least 600 years. Once part of the network that linked the most important cities and towns of the Inca empire, it was declared a World Heritage Site by Unesco in 2013.

The tradition has been passed on from generation to generation with every adult in the communities on either side gathering to bring new life to the crossing.

Tradition dictates that only men are allowed to work on the making of the bridge itself. Women remain in the upper part of the gorge, weaving the smaller ropes.

During the first day of the reconstruction, men gather around the old bridge and weave the smaller ropes into bigger ones. The main support of the bridge comes from six large three-ply ropes about one foot thick, each containing about 120 of the original thinner ropes.

Each family contributes sections of two-ply rope, woven by hand using a type of hardy grass, known locally as qoya ichu. In order to be more pliable, the grass has to be first beaten with a round stone and then soaked in water.

While everybody is busy, several villagers cook in wood stoves which have been brought from the villages for the occasion. Chicken, cuy (guinea pig) and trout from the Apurimac river are the most common dishes prepared, all accompanied by locally grown potatoes of different shapes and colours.

The old bridge is cut away and allowed to float downstream, where it will simply rot away, as it is made of grass.

Four of the six ropes of woven grass will become the floor of the bridge and the other two will be the handrails. All six ropes are firmly tied to large supports made of carved stone on both sides of the canyon. It takes most of the day for the men pull the ropes tight to the correct tension.

On the third day, a handful of men with no fear of heights walk the structure while tying small ropes from the handrails to the floor, making a fence which enables everybody to cross the bridge safely.

No modern materials, tools or machines are used in the whole process of building the bridge – only grass and human power.

The reconstruction of Q’eswachaka takes place once a year, and finishes with a celebration of food and music on the fourth day, which always coincides with the second Sunday of June.

All photographs by Jordi Busqué 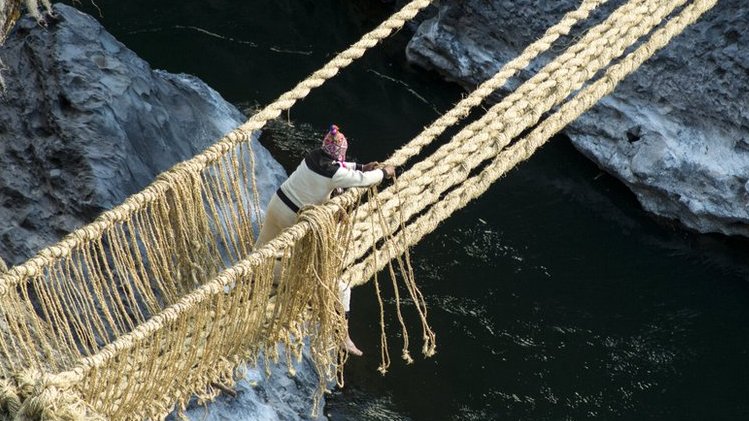