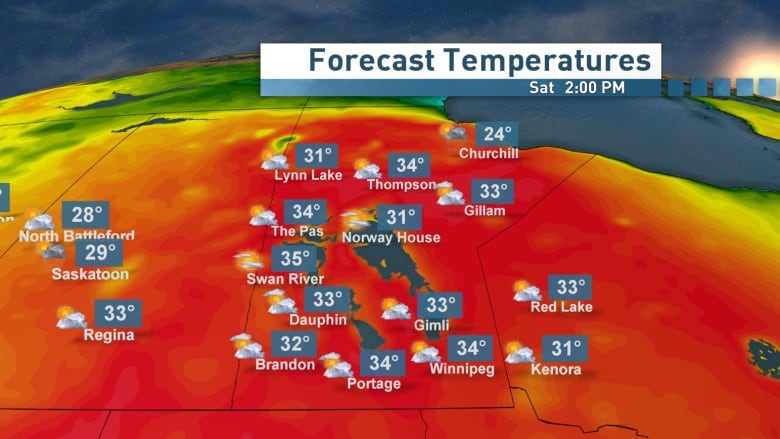 Extremely high temperatures in the Prairies smashed dozens of records on Friday, as several provinces grappled with an intense heat wave that’s continuing into the weekend.

The prolonged hot weather across the country has been caused by what’s known as a “heat dome,” which happens when ridges of high pressure hover over an area and create an effect similar to a pressure cooker.

Here’s a look at the impact of the heat dome in Manitoba, Saskatchewan and Alberta.

Warnings still in place across most of Manitoba

Manitoba broke 19 provincial hot weather records on Friday, with new highs stretching all the way from the northern part of the province to places south of Winnipeg, meteorologist Janelle Gergely of Environment and Climate Change Canada said Saturday morning.

As of Saturday afternoon, there were still extreme heat warnings in place for every part of the province but the Churchill and York areas, near Manitoba’s northeastern tip. There’s also a risk of thunderstorms across Manitoba on Saturday, beginning in regions near its border with Saskatchewan and moving east, Gergely said.

As the extreme temperatures continue, several organizations in the province are taking steps to make sure everyone has a place to cool off.

In Winnipeg, firefighters were set up at an outdoor cooling station with shady umbrellas and water bottles in the city’s downtown Central Park.

And Brandon’s Samaritan House said its shelter will be open Saturday and Sunday from noon to 3 p.m. CT because of the extreme heat.

The hot temperatures also meant a shorter day for Winnipeg’s long-standing St. Norbert Farmers’ Market, which planned to close up shop an hour early on Saturday because of the heat. In the market’s 34-year run, that’s only happened one other time: when it got flooded by rain and hail in 2014.

Extremely high temperatures in Winnipeg prompted a local farmers’ market to close earlier than usual on Saturday, while volunteers in the downtown area hand out bottled water to people who need relief from the heat. 2:03

That heat is expected to begin to break from north to south later Saturday, with a cold front that will bring a return to seasonal temperatures across northern Manitoba at night.

“It seems like there’s still peak heating today on Saturday. However, as we get into early next week, we’re going to see temperatures drop back down to seasonal as a lot of that heat pushes east into Ontario,” Gergely said.

“By Monday, you should be seeing seasonal [temperatures] across the province.”

In the meantime, she urged people to stay hydrated, wear a hat and sunscreen and plan any outdoor activities for when temperatures are at their lowest.

In Saskatchewan, temperatures reached as high as 40 C in the Saskatoon and Lucky Lake areas in the southern part of the province, setting new provincial records for July 2.

Several others reached temperatures nearly that high — including the Rosetown area at 39.8 C, the Leader area at 39.4 C and the Elbow area at 39 C — while dozens more were above 30 C, for a total of 35 daily maximum temperature records broken in Saskatchewan on Friday.

That included a 135-year-old record for July 2 being shattered in Regina, which saw a high of 35.3 C.

Saskatchewan is still expected to see one more day of dangerously high temperatures, as most of that province remained under a heat warning on Saturday. A cold front is set to return the region to seasonal temperatures on Sunday.

Alberta cooling off, but thunderstorms a threat

In some parts of Alberta, things are cooling off — although heat warnings remain in several regions.

That comes after Western Canada’s heat wave led Alberta Health Services to call a “code orange” standby in Calgary on Friday to prepare extra resources, including ambulances and health-care workers, in case of a spike in heat-related emergencies.

That standby was ended by late afternoon that day, while Calgary’s heat warning ended Saturday morning.

While some parts of the province remain under heat warnings, others are on severe thunderstorm watch, according to Environment and Climate Change Canada.

The combination of extreme weather types pushed Calgary emergency crews to the brink this week as the pressures of the heat wave coincided with a thunderstorm that flooded roads across the city Friday night.