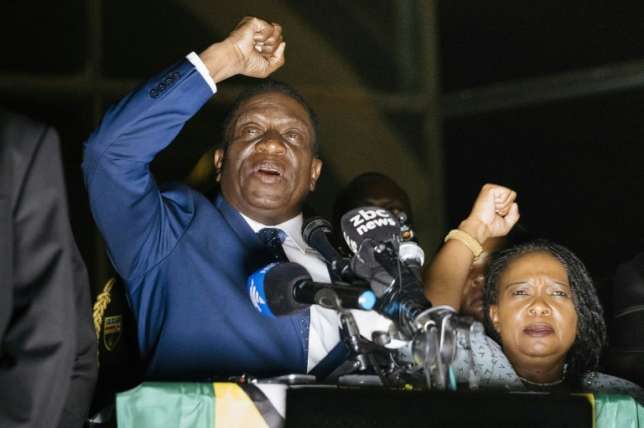 Emmerson Mnangagwa Ousted VP to be sworn in as Zimbabwe president

Zimbabwe’s Emmerson Mnangagwa was set to be sworn in as president on Friday, marking the final chapter of a political drama that toppled his predecessor Robert Mugabe after a military takeover.

Zimbabwe’s Emmerson Mnangagwa was set to be sworn in as president on Friday, marking the final chapter of a political drama that toppled his predecessor Robert Mugabe after a military takeover.

Mnangagwa, until recently one of Mugabe’s closest allies, will take the oath of office at the national sports stadium on the outskirts of Harare before thousands of supporters, dignitaries and foreign diplomats.

Mugabe, who ruled the southern African country for 37 autocratic years, was ousted from office when the military intervened after he had sacked Mnangagwa as vice president.

Mugabe, 93 and in increasingly frail health, had been positioning his wife Grace as his successor, but the army chiefs acted to halt the plan and usher in Mnangagwa.

“Come and be an eyewitness of history being made, the historic ushering in (of) a new era and better country,” said a statement from the ruling ZANU-PF party calling on people to attend the inauguration.

State television suggested that Mugabe may be present, but no official confirmed his participation.

Buses have been arranged to transport supporters to the 60,000-capacity stadium early on Friday.

Mnangagwa, 75, said this week that Zimbabweans were witnessing “a new and unfolding full democracy”, though critics say he is a ZANU-PF hardliner who gained power in a de facto military coup.

He is known as “The Crocodile” for his ruthlessness and is accused of overseeing ethnic massacres by the army in the 1980s and the 2008 election violence when Mugabe was at risk of losing the vote.

Ahead of the inauguration, the army warned that criminals had been impersonating soldiers since the crisis to extort money from the public and called on Zimbabweans to obey the law.

Britain, the former colonial power, said it was sending Africa Minister Rory Stewart to the ceremony.

Regional heavyweight South Africa said President Jacob Zuma would not be present as he was hosting a visit by Angola’s new head of state.

Zuma praised Mugabe, noting “his contribution to the liberation of the Southern African region and the decolonisation of the continent”.

Mugabe had ruled since Zimbabwean independence in 1980, exercising almost total authority to crush any sign of dissent.

The majority of Zimbabweans have only known life under Mugabe — the world’s oldest head of state — during a reign defined by brutality, rigged elections and international isolation.

His iron grip on power ended on Tuesday when his resignation letter was delivered to parliament, where MPs had convened to impeach him.

Mugabe was last seen in public on Friday and gave a defiant televised address on Sunday.

Neither he nor his wife Grace has been seen since, though they are expected to be given protection by the government.

The main opposition group, the Movement for Democratic Change, said it was “cautiously optimistic” that Mnangagwa would not be as “evil, corrupt, decadent” as Mugabe.

In the week before Mugabe resigned, military vehicles rolled down Harare’s streets, army generals made a TV address in the early hours and tens of thousands of Zimbabweans demonstrated against the veteran leader.

Zimbabwe’s once-promising economy collapsed under Mugabe’s rule, and many hope Mnangagwa will push through reforms to bring in investment.

Unemployment is over 90 percent, and in his first speech after being announced as the next president he promised “jobs, jobs, jobs!”