Dog the Bounty Hunter gives grim update on his wife 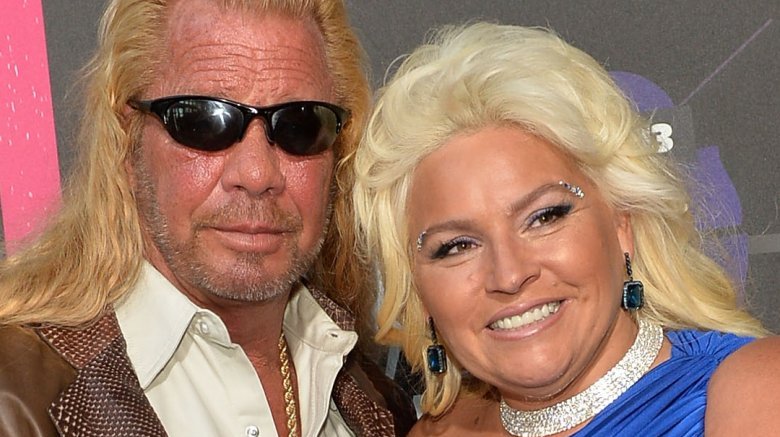 Dog the Bounty Hunter is speaking out on wife Beth Chapman’s second throat cancer battle for the first time.

“Listen, I appreciate the question, and please say a prayer,” Dog told the gossip rag when asked about Beth’s condition. “She’s not doing good.” After thanking the paparazzi for their concern, the former Dog the Bounty Hunter star continued, “I wish she could’ve been here tonight.”

As Nicki Swift previously reported, news that Beth’s throat cancer had returned first broke on Tuesday, Nov. 27, 2018. The 51-year-old underwent emergency surgery at Cedars-Sinai Medical Center in Los Angeles that day after doctors discovered a large cancerous mass in her throat. She’d been hospitalized earlier that morning after experiencing breathing complications the previous evening. While confirming this recent development to E! News, the Chapman family’s lawyer said, “We are all concerned for her and the well-being of her family.” At the time, the media outlet reported that Beth’s condition was “life-threatening.”

Meanwhile, Dog, 65, told Us Weekly earlier this week that he was “praying for the best” and would remain by his longtime love’s side. He later told the magazine, “They got most of the throat cancer out … but the doctors are afraid that it has spread. They are doing a biopsy scan to check if it has spread.” The reality TV star added, “I’m here every moment I can be for her. I’ve never had to go through anything like this in my entire life. I love my honey so much. I don’t know what I’m gonna do.”

For her part, Beth has since taken to Instagram to share an update of her own with the famous family’s devoted fan base. “Another bend in the Road yet not the End of the Road,” she wrote to her 263,000 followers, captioning a snapshot of the married pair in her hospital room. The A&E TV star completed her caption with the hashtags, “#faith #love #stayhumblepray.”

Readers may already be aware that Beth publicly disclosed her first battle with stage 2 throat cancer in September 2017. According to Radar Online, she revealed at the time, “My life has never been easy, and I surely don’t expect it to start now. Still, I’ve never been a victim and I won’t let cancer beat me.” That November, it was announced that Beth was cancer-free during the couple’s A&E special, Dog & Beth: Fight of Their Lives (via E! News). For his part, Dog later told Us Weekly that Beth’s health scare had “brought [them] closer” together.

Unfortunately, Beth Chapman isn’t the only celeb to recently reveal a cancer diagnosis. In late October 2018, Big Brother star Kevin Schlehuber took to Twitter to share a serious health update with fans. “Last night I got a call & went to the doctor with my family today. I was told I have cancer,” the 57-year-old wrote in part in a lengthy text-post. “I’m not posting this for sympathy but to raise awareness. Please go to regular check-ups & doctors appointments. Get tested & always be aware of how you feel.” Adding, “I FEEL perfectly healthy but that is not the case,” Schlehuber wrote, “I will beat this with the love & support from my family and close friends.”

Meanwhile, WWE star Roman Reigns announced late last month that he would be taking a leave of absence and giving up his WWE Universal Championship title amid his second battle with leukemia. During an appearance on Monday Night Raw, the 33-year-old athlete said, “I’ve been living with leukemia for 11 years and, unfortunately, it’s back and because the leukemia is back, I cannot fulfill my role.” He added, “I’m not looking for you to feel bad for me because I have faith.”

Our thoughts are with the Chapman family during this difficult time.