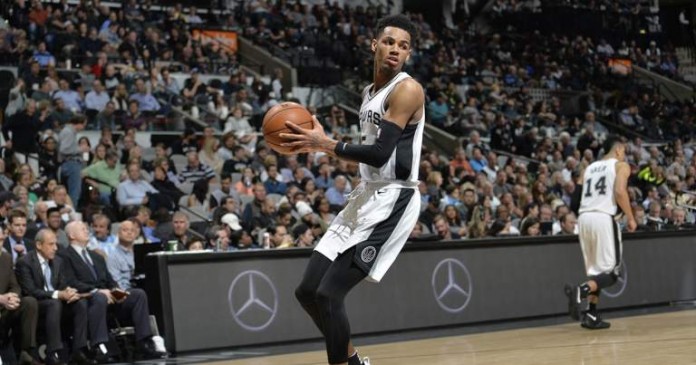 The San Antonio Spurs have a retooled starting lineup. And it is one that does not feature future Hall of Famer Tony Parker.

And it’s not because of injury or sickness that he is out but, rather, a part of a shift happening in Spurs basketball. Parker was moved to the bench to make way for Dejounte Murray as the new full-time starter.

“It was time,” the 16-year veteran admitted to media before the Cleveland Cavaliers game last week Wednesday. “Just like Manu [Ginobili], just like Pau [Gasol], that day is going to come. And if Pop sees something that is good for the team, I’ll try to do my best. I support Pop’s decision, and I’ll try to help [Murray] out as best I can.”

The 21-year-old has replaced the veteran in the opening lineup before. From the beginning of this season up until late November, Murray was first option at point but at that time, Parker was rehabbing the left-quadriceps tendon injury he sustained in 2017.

However, this time it seems that the promotion is permanent as the intention is to pass down the torch to the youngster.

With a week since the change, here’s an assessment of his performance as the new floor general for the Spurs.

On the offensive end …

San Antonio have won four of the last five and in that skid, the Washington product has had four games where he finished with double-digit scoring and three games where he notched at least ten rebounds.

His addition to the starting lineup appears to be beneficial as the Spurs offensive rating rises from 107.6 to 112.3 and they outscore opponents by 3.8 points per 100 possessions when he is on the floor, per NBA.com.

His best outing since the promotion was against the Cleveland Cavaliers when he recorded 19 points, 10 rebounds, three assists and seven steals to help clinch a 114-102 victory.

His presence helped alleviate pressure from main scorer LaMarcus Aldridge. As a facilitator, the 6-foot-5 point guard knows how to find open teammates and can set up shots for them – with the sweet spot lying between midrange and the perimeter.

On the defensive end …

While he is finding his rhythm on offense, Murray shines on the other end of the floor. He currently has the best defensive rating among starters (95.4) in the league and has developed into an astute on-ball defender and a competent rim protector.

Since getting his new role, Murray has showcased his improved rebounding skills which help the Spurs gain or save possessions. In the past five games, he leads the team in defensive rebounds (7.0) and steals (1.6) while recording 1.9 deflections per game.

A good example of how his finesse has assisted San Antonio was against the Cavaliers where he orchestrated a five-point play in less than 30 seconds through his defense. In the closing minutes of the second quarter, Murray grabbed the offensive board and tipped it in after Danny Green missed his long-range shot. In the next possession, he forced Derrick Rose to commit a turnover and then assisted Patty Mills’ 3-point shot to give the Spurs a 32-29 edge toward the end of the half.

Murray has proven that he deserves to be a starter, however, he still struggles to be consistent, especially when it comes to shooting. Sometimes he’ll start off hot and will rally points in the opening quarter and then his energy begins to fade by the third. In other occasions, he’ll struggle to get any offense going at all.

Point in case: on Tuesday against the Denver Nuggets, Murray did not score a single point. He was still active on the floor – notching 13 rebounds, seven assists and two blocks. However, he was 0-of-4 from the field and did not attempt any shots from 3-point range or draw any fouls. Part of the problem is that the second-year guard can’t really shoot anywhere further than five feet from the rim. His midrange is lackluster and his perimeter shooting non-existent. Hopefully with time, he can learn to diversify his shot and generate offense outside of the paint.

While he settles as part of the core, Murray is still developing. The good news is that under the tutelage of coach Popovich and the assistance of Parker, he could fully realize his potential and help usher in a new era of Spurs basketball.