Wowplus
Home Sports Basketball Nuggets could surprise in the West 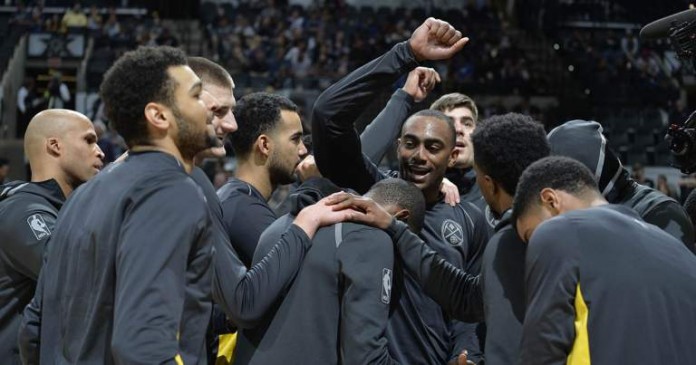 When I think of the Denver Nuggets, Carmelo Anthony and JR Smith come to mind. They were the team to beat in the Western Conference under the tutelage of Hall of Fame coach George Karl. Yeah, I get that some might squint at the lines above; yes, the Nuggets at one point belonged in that elite team conversation. Kobe Bryant, Manu Ginobili, Derek Fisher and even Tim Duncan knew that the mile-high ball club had lofty ambitions and played the same way.

It’s 2018 and the Western Conference landscape has morphed into an unrecognizable beast. Teams that were once rebuilding are hanging championship banners and the ones hanging championship banners are rebuilding; a metaphor for life exists in those words and the Denver Nuggets fall somewhere in between those two spheres. Their last winning season was in 2012-13 when their 57 regular-season wins ensured they belonged in the upper echelons.

Different players occupy the Pepsi Center home locker room led by a somewhat different head coach in Michael Malone. It’s been five years since the team from Colorado graced the playoffs, but if they were to start today they would be in by virtue of their eighth-seed position, meaning a first-round elimination by the Golden State Warriors. To be fair though, most teams would suffer the same fate if they met the Warriors. Let’s not get too far ahead of ourselves, however, it’s February and a whole lot of the regular season is yet to be played.

As expected the team did start strongly earlier in the season and at some point pulled a 7-2 win stretch until they lost their main acquisition in the offseason, Paul Millsap. The combination of Millsap, Nikola Jokic and veteran Richard Jefferson all but ensured a playoffs appearance for Denver, but injuries quickly dissipated any thoughts of that. At best Millsap may come back at the end of this month. That throws the franchise into disarray after a positive start.

One name that really stood out during the struggle was Will Barton, Denver’s version of a Swiss army knife. A strong rebounder and good shooter, the versatile forward has more than once saved the Nuggets blushes. That aside, everything the franchise does on the court hinges on Jokic whose game reminds me of one Arvydas Sabonis. A big that can play multiple positions while getting bums on seats with his flamboyancy. He is averaging stellar numbers: 16 points, 10 rebounds and five assists per game. I don’t know about you but those are All-Star numbers and at that rate a playoffs berth won’t surprise me.

So far inconsistency has been the enemy of progress, but impressive wins against the Portland Trail Blazers, Dallas Mavericks and the New York Knicks in the past month have given their fan base a reason to believe their playoffs drought will end. Just like almost every team in the association with a modicum of success, the team is not position-oriented. They don’t play with a traditional point guard. Who needs a point guard when your big men can pass the rock around like Millsap and Jokic. We saw that with the Michael Jordan-led Chicago Bulls and we see it from current players like Draymond Green of the Warriors. The game has evolved and the Nuggets have evolved with it. It would be foolish to say that their modest success comes from only those two players as Congolese guard Emmanuel Mudiay, Garry Harris, Jamal Murray, Kenneth Faried, Trey Lyles, Wilson Chandler and Mason Plumlee complete the foundation of this Western Conference team.

Going forward, coach Malone will hope that this foundation goes the distance. Can they surprise in the strong Western Conference? Yes and no. If they make it to the playoffs as an eighth seed and the Warriors finish the season as the No 1 seed, it will be a nice and early fishing trip for them. But, if they can be consistent enough to improve their seeding, they can indeed shock the world like they did all those years back when Dikembe Mutombo and his then Nuggets knocked off the No 1-seeded Seattle Supersonics.

It looks like the number one and two seed in the West is a lock for the Golden State Warriors and Houston Rockets, respectively. We already touched on their prospects against the Warriors, so you’d think their best bet would be meeting the Rockets as a seventh seed, right? Wrong; they’ve lost five straight to the Rockets going back to 2016. Defending teams which transition quickly from defense to quick 3-pointers will be a problem for them in the playoffs. Denver is a hustle-and-grind kind of team and would prefer to meet a Minnesota Timberwolves or a Portland Trail Blazers. Can they pull off another 1994 upset? Well, time and the return of Paul Millsap will surely provide that answer.