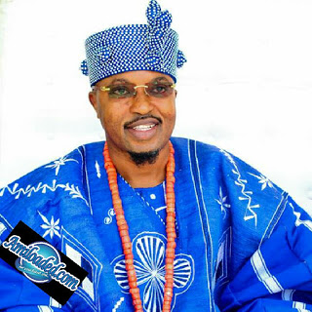 The Oluwo of Iwoland in Osun state, Oba Adbulrasheed Akanbi Saturday made history when he dropped the the title of Oba and declared his resolve to adopt the Emir title popularly known with Northern traditional rulers.

Speaking at the installation and turbarning ceremony of an Islamic scholar, Sheikh Yahquub Abdul-Baaqi Mohammed as first Waziri of Yoruba land, Oba Akanbi said he decided to now bear “Emir of Iwoland” because he wants to emulate the attitudes of northern Emirs.

According to Oluwo, Northern traditional rulers are better behaved than his counterparts from the Southwest saying Yoruba Obas are full of bickering, acrimony and enmities.

“I have decided to officially adopt Emir title today because I want to emulate the attitudes of Northern Emirs. They don’t begrudge themselves like Yoruba Obas.

” It will surprise you to discover that for the past two years, there has not been meeting of Yoruba traditional rulers just because of enmities. There is nothing strange in adopting Emir title. I am the Emir of Yorubaland,” Oluwo said.

At the well attended ceremony held at the palace of of the traditional ruler in Iwo on Saturday, Islamic scho)lars, Islamic organisations, Imams and Alfas, government functionaries among other notable personalities in the state were present.

The installation of the Waziri was against warning served on Oluwo by the League of Imams and Alfas in Southwest Nigeria, Edo and Delta States asking Oba Akanbi to desist from installing Alhaji Mohammed as the Waziri of the Southwest.

In a statement signed by the President , League of lmams and Alfas, Southwest Nigeria, Edo and Delta States, Sheikh Jamiu Kewulere Bello urged Oba Akanbi to limit the title to Iwoland and not to the entire Yorubaland as being purported.

” The proposed installation of the said recipient by your Highness as the Waziri of Iwo land is no doubt the result of your avowed commitment to the development of lslam, the lwo Community and Osun State in general

“However, it is our considered hope that your Highness should as a matter of urgency correct the rumours making the round that the organisers of this event are trying to over blow the ceremony to capture the entire Yorubaland. This is not right.”

But Oba Akanbi shunned warnings by the Islamic leaders and installed the Waziri amid pomp and pageantry saying “Iwo has used this Waziri title to announce to the world that truly Iwo is the citadel of Islamic knowledge.”

The traditional ruler added that “Iwo has a unique and distinctive traditional history among the entire Yoruba race. And these peculiarities have made Iwo to be at the forefront in Yoruba land.

” The occasion of the installation of Waziri Yorubaland is another great opportunity to create the necessary awareness and promote to the entire world the deep Islamic culture and heritage in Iwo.

“Waziri did not come from Northern part of Hausa tribe but from God. So, there is nothing strange in installing Waziri. Yoruba has forgotten their history. Whoever is critisising me lacks history of Yorubaland,” the monarch noted.

The new Waziri promised to render selfless services that would promote religious growth and peaceful coexistence in Yorubaland.