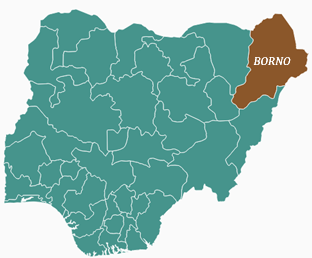 EASTER: 11 killed in Boko Haram attacks in Borno
No fewer than four members of the dreaded Boko Haram sect, four suicide bombers and three civilians were killed in separate attacks on two villages of Malumti and Muna Zawiya village, Mafa Local Government Area of Borno State. The incidents, according to a reliable source, took place on Friday evening. In a press statement signed by Colonel Onyema Nwachukwu, Deputy Director, Public Relations, Theatre Command, ‘Operation Lafiya Dole’, said, “the four insurgents who had been routed out of the Sambisa Forest by troops in Operation Deep Punch II, were rummaging for food and logistics when they met their Waterloo. “The gallant troops recovered a Toyota Land Cruiser, one AK 47 Rifle, 15 Rounds of 7.62 mm ammunition and one magazine. Troops also recovered 47 Jerrycans of Premium Motor Spirit, PMS, from the insurgents. “In another development, troops of Operation Lafiya Dole deployed at a checkpoint ahead of Muna Zawiya in the outskirts of Maiduguri, yesterday, neutralised four suicide bombers comprising a male and three females. “The suicide bombers were attempting to infiltrate the Maiduguri Metropolis through Muna Zawiya area at about 9.30 pm but were spotted by vigilant troops, who fired shots hitting one of them and thereby triggering a simultaneous explosion killing all the four bombers. “Regrettably, however, 18 persons were injured in the incident. The wounded have been evacuated for medical attention. Meanwhile, troops and members of the Civilian Joint Task Force are presently conducting cordon and search operation in the area for any other suicide bomber lurking around. But available information obtained from residents so far, revealed that the four blasts were said to be carried out by the suicide bombers leading to the killing of three civilians, apart from the 4 bombers. 18 others sustained various degrees of injuries as well as 5 sheep’s killed during the blasts. The injured persons are currently responding to treatment at specialist hospital Maiduguri. Confirming the Muna Zawiya suicide attacks, though Contradictory to that of the military, Police Public Relations of Borno State Command, DSP Edet Okon, in a statement earlier said, “At about 2149hrs yesterday, 30/3/18 four (4) female suicide bombers infiltrated Muna Zawiya village in Mafa LGA outskirt of Maiduguri Metropolis. “They detonated the explosives killing themselves and one other person (female). Thirteen (13) persons were injured and were taken to a hospital where they are responding to treatment. “The Borno state police command had dispatched men to the scene including men of the CTU, SARS and EOD to sweep the place and make the environment safe. Normalcy has returned to the area. Meanwhile, adequate security arrangements has being emplaced for a hitch free Easter celebration. Patrol and Monitoring Continues.” said Okon. end
Share
Facebook
Twitter
WhatsApp
Pinterest
Linkedin
ReddIt
Email
Print
Tumblr
Telegram
Mix
VK
Digg
LINE
Viber
Naver
Previous articleCONTROVERSY: Yoruba Oba drops title, becomes Emir
Next articleWe want to save the lives of 250,000 children with the application of right vaccines — Dangote