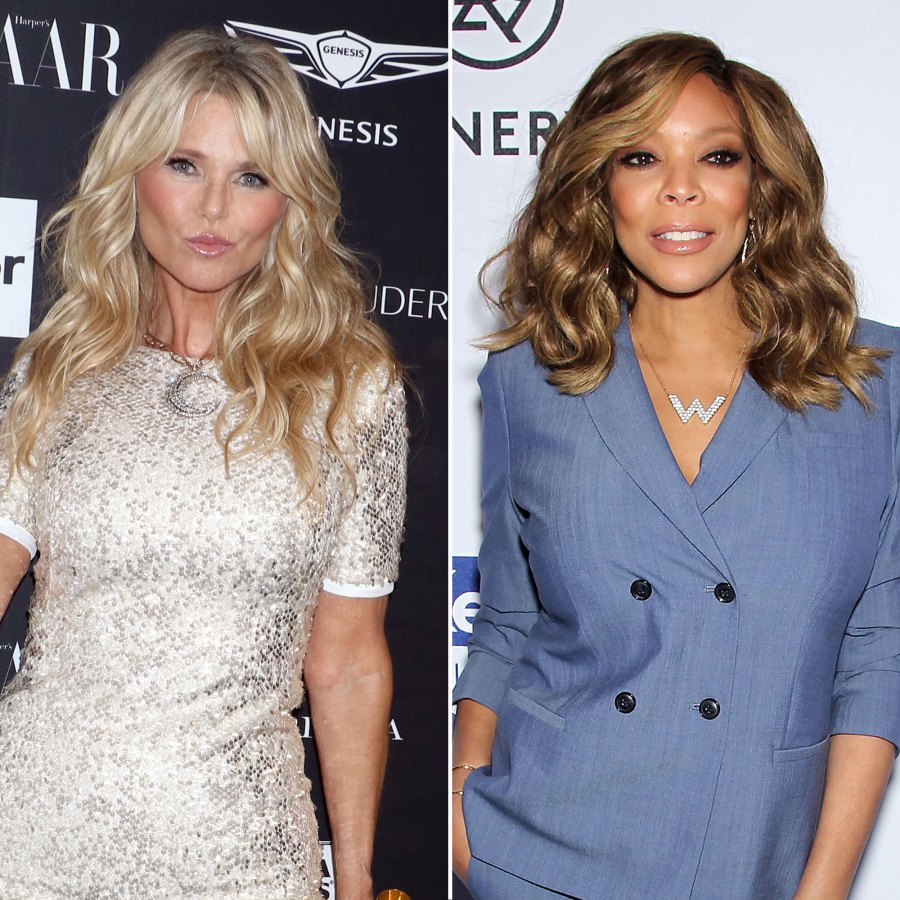 Christie Brinkley wants the world — and Wendy Williams — to know that her Dancing With the Stars injury is not “fake as hell.”

The model, 65, responded to the talk show host’s claim that her broken arm isn’t real on the Thursday, September 19, episode of The Talk. She explained that she was confused by Williams’ statement because of their amicable relationship.

“Wendy Williams started this rumor, which was stunning to me because I’ve been on Wendy’s show a couple of times,” she said. “For some reason she liked me, and she would call on me to support her in tough times. So, I got a call one day that she was having a terrible bout of stage fright, and she was about to drop out of Chicago The Musical, and would I come over and talk to her. I was like, ‘You will never meet a more supportive and loving cast. You will love this experience and you will regret it if you don’t do it.’”

The Michigan native, who has been divorced four times, also said that she helped Williams when the host went through her split with then-husband Kevin Hunter earlier this year.

“I was there for her. Then she goes through a divorce, and I get a call again,” Brinkley said. “I get a call again, because let’s face it, I’m kind of an expert in that. I came again and was like, ‘I’m going to help you.’”

In the end, Brinkey urged the New Jersey native to think about how her words affect others.

“My message to Wendy is, it’s so much more fun to be kind,” she replied. “Try it. It can’t feel good to try to hurt other people. If it feels good, something’s seriously wrong.”

ABC announced on Monday, September 16, that Brinkley dropped out of DWTS due an injury she sustained during a rehearsal. Her 21-year-old daughter Sailor Brinkley-Cook, who the fashion icon shares with ex-husband Peter Cook, replaced her.

Dancing With the Stars Winners Through the Years

“While rehearsing for the premiere of Dancing With the Stars, Christie Brinkley suffered injuries which required surgery to her wrist and arm. She is unable to continue her planned participation on the show,” ABC told Us Weekly in a statement on Monday. “Keeping it all in the family, her daughter Sailor Brinkley-Cook, a Sports Illustrated model, has chosen to quickly step in with hours to learn the entire routine and will compete in her mother’s place for the remainder of the season.

After the announcement, Williams claimed on The Wendy Williams Show that Christie faked the injury, so her daughter could compete on DWTS.

She continued, “Sailor is a Sports Illustrated model, but that’s not like being Kendall Jenner — supermodel of the world. In order for girls to get this leg up, it takes more than beauty. You have to have caché. There’s a lot of eyeballs watching, and Christie really doesn’t need that.”

Though Williams apologized to Christie on the Tuesday, September 17, episode of her talk show, she said that her “opinion still stands.”

In an interview with Entertainment Tonight on Thursday, September 19, Sailor responded to Williams’ claim that her mother’s broken wrist and arm weren’t real.

“It’s so insane to me,” she said. “I can’t even find comments because it’s so real to me, the emotions are still so new.”

She continued, “Getting that call from my mom [about her injury] … she was sobbing, crying She was so disappointed because she couldn’t do it anymore. She wasn’t even crying because she was hurt, she was like, ‘I let everyone down. I won’t be able to keep going on Dancing With the Stars.’”

Most Disastrous ‘Dancing With the Stars’ Partners Ever!

Sailor, who is partnered with pro Val Chmerkovskiy for the current season of DWTS, earned a score of 18 out of 30 on Monday’s episode.

Dancing With the Stars airs on ABC Mondays at 8 p.m. ET.