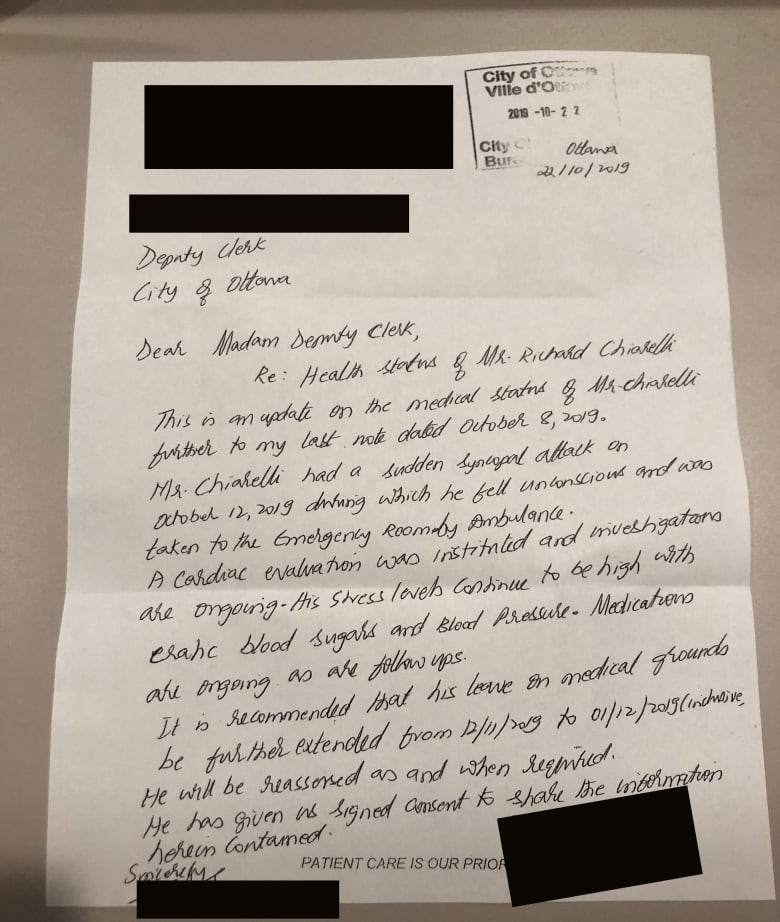 Councillors were provided with an updated medical note explaining the reason for the College ward councillor’s request, but still decided against granting the leave in a vote of 20-0 — councillors Diane Deans, Allan Hubley, Jenna Sudds and Chiarelli were away.

Thirteen women have now told CBC about inappropriate behaviour and comments by Chiarelli in his office and during job interviews. Chiarelli has denied all allegations.

Before the vote, city solicitor David White warned councillors not to take the allegations against Chiarelli into account when making their decision about the councillor’s leave.

But that didn’t stop Mayor Jim Watson from speaking his mind after the council meeting.

“There’s a lot of important issues we’re dealing with and Coun. Chiarelli’s ward does not have a voice. We’re trying our best to do so through two members of council filling in, but as you saw today, there’s precious little support for Coun. Chiarelli,” Watson said Wednesday.

“I think as more allegations come forward, it becomes more disgusting and very upsetting as to what was going on in that office for what appears to be many, many months, if not years.”

Under the Municipal Act, if Chiarelli does not show up to council by the end of the November, his seat will be declared vacant.

Ottawa city council unanimously denied Coun. Rick Chiarelli’s request for a leave of absence on Wednesday. Chiarelli must attend council by the end of November or his seat will be declared vacant.  1:03

The city clerk told CBC he can’t remember a previous case where council denied a request for leave.

Council members appeared unconvinced Chiarelli should be granted indefinite leave based on the details of the medical note, which states Chiarelli went to the emergency room after fainting on Oct. 12, and that his stress level remains high.

Chiarelli has provided the clerk with three notes: one in September, which was updated earlier this month, then again this week.