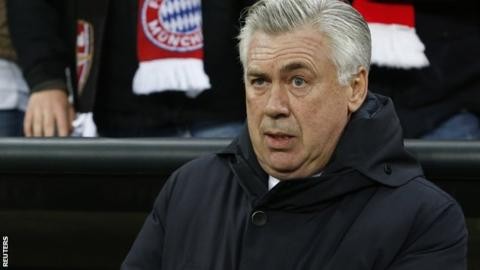 Bayern Munich boss Carlo Ancelotti will not be disciplined over his middle finger gesture to Hertha Berlin fans.

The Italian ex-Chelsea manager made the gesture as he walked down the tunnel following a 1-1 draw in Berlin where his side equalised in the 96th minute.

Ancelotti, 57, told German broadcaster ARD he did it “after being spat at”.

The German FA (DFB) said his reaction was “understandable” but said he would pay 5,000 euros (£4,230) to its DFB Foundation as an apology.

“The DFB panel has accepted this position and will cease its inquiry,” said the German FA in a statement, adding that Ancelotti’s donation was “an apology for his gesture”.

Bayern are now five points clear of RB Leipzig at the top of the Bundesliga following the draw with Hertha last Saturday.