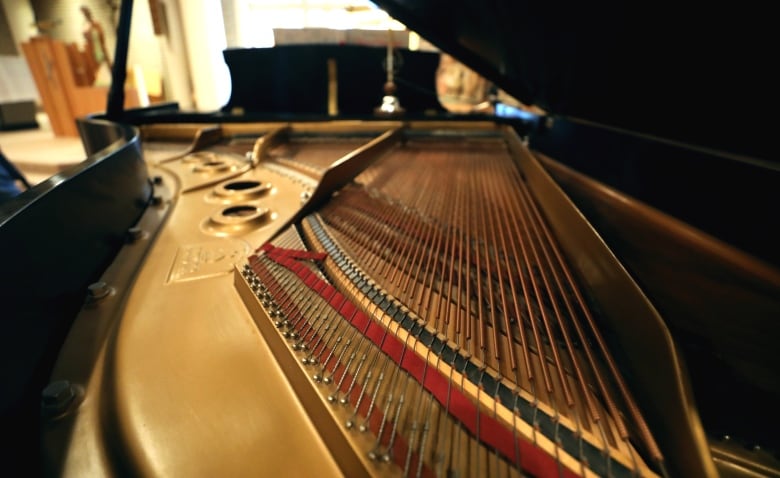 Care home moves in professional musician’s grand piano so 91-year-old can play it again, As Sister Joan Miller sits down to the piano, she pauses and takes a deep breath.

Even at 91, her hands flutter along with the keys of a special piano — the last gift her father gave her before he passed away.

This month, Miller got to play on her own grand piano for the first time in almost four years. The piano was moved to the Santa Maria Care Home in Regina just for her.

“When I put my hands on the keys, then I want to play,” Miller said, with a smile as she pauses in between songs. “The music’s already coming out and usually comes before you start to play, so you already have an idea.”

Miller has been at the home for about three years. She’s been separated from her piano for years.

Now when she plays, she’s concentrating and smiling again.

“It’s like you’re being enveloped by it. I don’t know how to express it … it’s so wonderful.”

Miller started playing the piano at age six. When she was 10, her family moved from Weyburn, Sask., to Regina, and she kept studying piano at the Sacred Heart Academy. After high school, she became a Sister of Our Lady of the Mission. Miller eventually earned her associate in music from the Royal Conservatory of Music.

After moving around, she settled in Brandon, Man., teaching all fall, winter and spring, and studying in the summer. Teaching came naturally to the daughter of two educators.

“I love music so much. I do really like working with children and adults, too,” she said. “What I tried to impart to them was a great love for this instrument.”

Miller studied at the University of Regina, University of Saskatchewan in Saskatoon, and Indiana University. She completed her PhD in music and studied in Italy and London. She’s also adjudicated piano festivals across Canada.

While teaching in 1970, Miller’s father stopped by with a surprise. He gave her a Steinway grand piano. It was the last thing he gave her before he passed away in 1972.

“He was so happy. He absolutely came and had me play for him and he just loved the piano,” she said. “And I think he knew that it meant so much to me.”

Her father influenced her music career heavily by pushing her to keep going even on days she didn’t wish to. Now when she plays, Miller thinks of her father every time.

After health issues began taking their toll on Miller, she moved into a care home in Regina. She asked to come to Santa Maria Care Home in Regina’s south end because of the chapel but longed to play again.

Her piano was put into the care of a former student, Gregory Chase. He held onto it until last week, when the care home started moving it in. Professional movers disassembled and reassembled it in the chapel area.

“I’ve been in heaven ever since,” Miller said. “It just speaks to me.

She wishes she could play at her best, but her arthritis hurts her and she can’t manage the pedals as well as she used to.

Opening her piano to others

Now that it’s in Regina, Miller hopes other artists or students under the careful watch of their teachers would take the opportunity to play on the Steinway at Santa Maria.

“It’s got to be people who value it. And I’ve been very fortunate here because they’ve given me and my piano such a warm welcome,” she said.