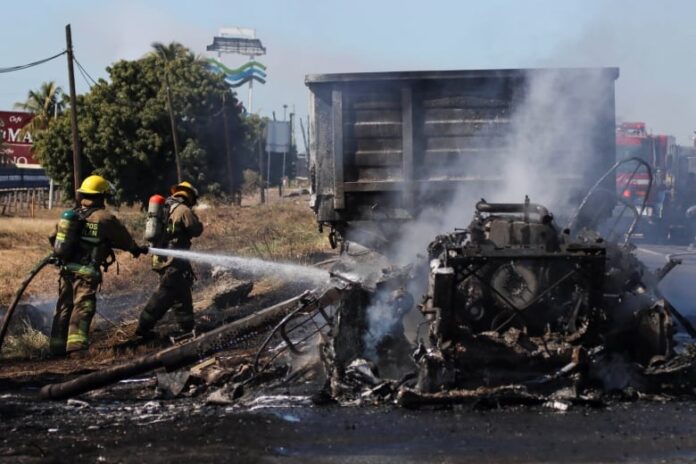 Canadian tourists in Mexico remained barricaded in their hotel Friday amid violence in the streets after the arrest of a major alleged drug cartel leader.

“They’re safe in their hotel,” said Tina Dahl, an Edmonton woman with relatives stranded in the popular resort town of Mazatlan.

She said her six family members had been staying in their hotel rooms since Thursday afternoon and remained safe.

Several cities in the Mexican state of Sinaloa exploded into violence Thursday after the arrest of alleged drug trafficker Ovidio (The Mouse) Guzman, who is a son of former cartel boss Joaquin (El Chapo) Guzman. The violence is particularly fierce in Culiacan, Mazatlan, Los Mochis and Guasave.

They were to fly out Thursday evening, but street fighting closed the airport and buses that were to take them there were burned in front of the hotel.

Dahl, who has been in touch with her family through social media, said they described a scene of chaos.

Stranded travellers who had checked out of their rooms but whose flights were cancelled slept in the hotel lobby, the gates of which remained barricaded, she said. Military and police vehicles trundled up and down beaches that had been recently full of suntanning vacationers.

Helicopters patrolled the skies. One restaurant that remained open was packed, she said.

Dahl said her family was being careful to keep their cellphones charged after hearing rumours that cartel members were planning to shut down Mazatlan’s power grid.

“My brother did call my mom and dad yesterday and he’s like, ‘It’s something I’ve never seen before. It’s like something in the middle of a war zone and I don’t know what to think and feel.’

“He’s definitely shaken, for sure.”

Dahl said her family was to talk with Sunwing on Friday to see when they could get a flight home.

Not all Canadians in Mazatlan were behind barricades.

Hailey Bronson said she expects to be heading home to Cochrane, Alta., as planned on Sunday, although a few of her friends had their flights rescheduled.

She has been staying in an apartment downtown and said it was strange to see the usually busy town of Mazatlan turn silent Thursday.

“I’ve never seen Mazatlan so quiet in my life,” Bronson said in a message Friday. “But today everything is back to normal.”

Winnipegger Sheila North, in Mazatlan with two adult children and her two-year-old grandson, was on a catamaran excursion with her family when she saw plumes of smoke in two different areas and black helicopters flying around Thursday afternoon.

“[The staff] wanted to create a sense of calm, but you could tell that they were being told stuff on their phones that something was going on,” North said in a phone interview Friday.

“So we stayed on the excursion until it was done and when we came back to the hotel, that’s when we saw long lineups.”

Lineups to get into the hotel restaurant stretched while people waited hours to get in, North said.

Some families were forced to sleep in the hotel lobby, while some staff members opted to stay overnight at work, she said.

North and her family were supposed to fly back to Winnipeg on Friday morning, but have been told their flight is delayed until Saturday.

“There’s a general sense of uneasiness. People are regrouping, but I can see that some parents are really stressed.”

The federal government continued to advise Canadians in Mexico to shelter in place, avoid crowds and demonstrations, and not to try to cross blockades, even if they appear unmanned.

WestJet said it had cancelled two flights in and out of Mazatlan on Friday. Air Canada said none of its flights were affected by the unrest.

Sunwing did not immediately respond to a request for information on its flights.

An attempt to arrest Ovidio Guzman also led to violence three years ago. An aborted operation to capture him in October 2019 set off violence in Culiacan that ultimately led the Mexican president to order the military to let him go.