Michael Snow, Canadian artist who ‘knew no boundaries,’ dies at 94 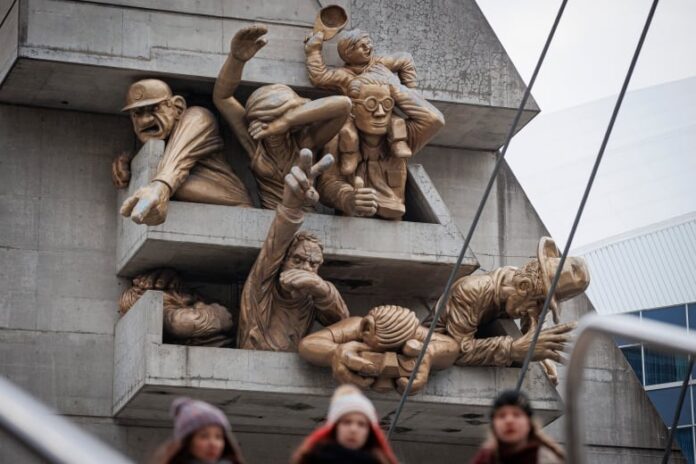 Michael Snow, a legendary Canadian artist who graced Toronto with two famous pieces of public art, has died. He was 94.

The Art Gallery of Ontario said Snow was “known internationally as a painter, sculptor, filmmaker, musician and author.”

The art world is mourning his death. Tributes to his work are being posted on Twitter. Snow is being remembered for groundbreaking work.

In Toronto, Snow is known for Flight Stop, a collection of life-sized Canadian geese in flight at the Eaton Centre, created in 1979, and The Audience, two massive, gold-painted sculptures at the Rogers Centre depicting sports fans in celebration, unveiled in 1989.

“His work explored a wide range of media including iconic and groundbreaking film, installation, sculpture, photography, and music. OCAD University mourns his passing,” the school said in the tweet on Friday.

Sarah Milroy, chief curator at the McMichael Art Gallery in Kleinburg, Ont., north of Toronto, described Snow as a “one of the leading lions” in Canadian art.

“All of us at the McMichael celebrate his myriad accomplishments across the media of painting, sculpture, film, photography and experimental music,” Milroy said in a tweet on Friday.

National Gallery calls Snow a ‘giant in the art world’

In a statement on Friday, the National Gallery of Canada said it was “deeply saddened” by his death. It called him a “giant in the art world” in Canada and around the world.

“His innovative, versatile artworks radiate beyond our borders, and made him a formidable ambassador,” the statement reads.

“Snow’s influence spans multiple generations; his legacy one of transforming in unprecedented ways the relationship between the artwork and the viewer. His creative experiments challenged perceptions and ultimately changed how we might understand art, the world and one other.”

According to the website of the Jack Shainman Gallery, Snow’s work explored “the nature of perception, consciousness, language, and temporality.”

It said Snow was “one of the world’s leading experimental filmmakers” because of his film Wavelength, which was released in 1967. Noted for its 45-minute camera zoom, it is regarded as groundbreaking experimental cinema.

The short film takes place entirely inside a loft apartment as the camera slowly zooms in on a window frame, interrupted four times by events that play out on screen.

Early on, two women listen to John Lennon’s Strawberry Fields Forever, and shortly after they leave the shot, a man staggers into frame and falls on the ground, seemingly the victim of a murder. The zoom continues until he’s out of the camera’s view, eventually finishing with a woman who enters the loft and calmly phones a man to report that she’s found a body.

In 1970, Snow was featured in a solo exhibition at the Venice Biennale.

A biography on the Art Canada Institute website describes Snow as a self-taught musician who played piano in jazz bands. In 1974, he was a part of the Canadian Creative Music Collective, an improvisation group that founded Toronto’s Music Gallery.

He continued making experimental short films too, while exhibiting some of his other works around the world, including at the Art Gallery of Ontario.

The AGO last had an exhibition of his work, Objects of Vision, in 2012 in celebration of him receiving Gershon Iskowitz Prize.

Stephan Jost, CEO and director of the AGO, said the art gallery was saddened to learn of his death.

“Michael Snow was a great artist and person — a legendary Toronto artist whose highly acclaimed and influential career spans all media, including painting, drawing, sculpture, photography, film, video projection, sound art, bookmaking and experimental jazz. While we mark his passing, his work lives on. Our hearts and sympathies are with his family.”

‘We lost one of our icons, for sure’

“Now was he making new work? Not as much, but he was a busy guy flying all over the world,” he said. “I remember sending his works to Barcelona and the Guggenheim Museum.”

Cutts has exhibited Snow’s work at his gallery, namely his Power of Two installation in 2005.

He said despite Snow’s small stature, he remembers that he took up all the oxygen in the room based on his presence.

Renowned artist (and <a href=”https://twitter.com/hashtag/OCADU?src=hash&amp;ref_src=twsrc%5Etfw”>#OCADU</a> alum) Michael Snow knew no boundaries. His work explored a wide range of media including iconic and groundbreaking film, installation, sculpture, photography, and music. OCAD University mourns his passing. <a href=”https://t.co/Zt1cGhiKzm”>pic.twitter.com/Zt1cGhiKzm</a>

“With the death of Michael Snow on January 5, Canadian art lost one of its leading lions. All of us at the McMichael celebrate his myriad accomplishments across the media of painting, sculpture, film, photography and experimental music.” – Sarah Milroy, Chief Curator <a href=”https://t.co/lSFllQWvOq”>pic.twitter.com/lSFllQWvOq</a>

The NGC is deeply saddened by the death of Canadian multidisciplinary artist Michael Snow – a giant in the art world, in Canada and internationally. His innovative, versatile artworks radiate beyond our borders, and made him a formidable ambassador.<a href=”https://t.co/k4VUtHLZRC”>https://t.co/k4VUtHLZRC</a>

Rest in Peace, Canadian treasure, Michael Snow. Always so accessible, so much fun! (See also, those Geese you look up at in Eaton Centre) <a href=”https://t.co/uHjy2j6Fpc”>pic.twitter.com/uHjy2j6Fpc</a>