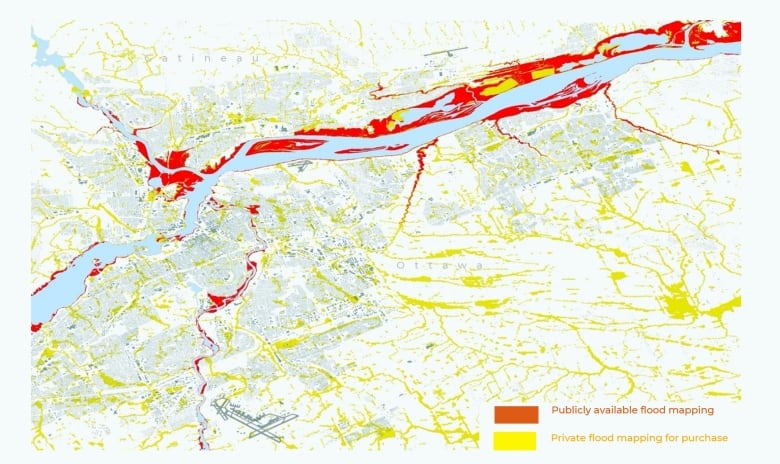 Canadians are unknowingly buying and building homes and other infrastructure in areas at high risk of flooding, wildfires and other climate change impacts. That could lead to billions of dollars in damage each year, says a new report from the Canadian Institute for Climate Choices.

Investing in adaptation could slash those costs — but just about no one has the information they need to be able to adapt, according to the report released last week from the federally funded think-tank.

“There’s pretty poor understanding of climate risks and really poor risk-disclosure practices across the country,” said Dylan Clark, a senior research associate at the institute and co-author of the report, during a media briefing.

There’s little to no public information on current flood, wildfire or permafrost thaw risks, he said, let alone taking into account the future of climate.

“Information that’s readily available to most decision-makers and investors and consumers does not provide enough information to make informed decisions — and that’s a key barrier here to adaptation.”

For example, publicly available government data from local conservation authorities generally show only areas at risk of flooding due to rivers and coasts, the report said.

Researchers were able to obtain data — available for a fee from a private company, JBA Risk Management — that showed 325,000 buildings in Canada are at risk of flooding from heavy rainfall and another 625,000 are at risk from flooding due to rivers breaching their banks, whose owners “have no way of knowing that their properties are at risk of flooding” the report said.

Even JBA’s maps don’t have enough detail to identify individual homes at risk. However, the maps do “highlight that there is that [information] gap,” said Ryan Ness, the report’s lead author.

The report recommends that governments and regulators require owners of existing and proposed buildings and other infrastructure to disclose climate change risks, saying the government should start to generate that information and make it publicly available for that purpose.

Some federal funding has been allocated in recent years for flood mapping, but the insurance industry has complained that progress has been too slow. Meanwhile, other researchers have found the provinces haven’t been moving fast enough either on flood mapping, emergency plans and critical infrastructure protections to adapt to climate change.

How the research was conducted and what it found

The study found that under the high emissions scenario, by 2100:

However, costs could be cut by reducing global warming through emissions cuts and adaptation to reduce damage from climate change impacts.

“Ultimately, we’ll need both adaptation and mitigation,” said Dale Beugin, the institute’s vice-president of analysis and research and a co-author of the report.

Buyouts in flood zones and other adaptation tactics

The report includes recommendations for steps to adapt Canada’s buildings and other infrastructure to changing climate, which would reduce the damage to people’s lives and property. They include:

The researchers acknowledged that much of that adaptation can’t happen without knowing what areas are at risk of damage.

“The current lack of climate risk information, however, does not justify continued inaction on adaptation,” the report says, adding that recent climate-related impacts and disasters provide enough evidence to start moving on the biggest risks and most vulnerable areas.

Nor does it mean the government can’t require disclosure of risks where that information is available, Ness said, so people like homebuilders, homebuyers and insurers can protect themselves.

While there isn’t the full scale of information needed for full disclosure of risks, he said, “there is information that’s out there that’s not being disclosed.”

Regulations requiring disclosure could actually speed up the availability of such data, said Beugin. “This also creates incentives to … generate that information and get more information out there.”

But will the governments act?

Ann Dale, a professor and the director of the School of Environment and Sustainability at Royal Roads University in Victoria, has previously done research on sustainable infrastructure. She said the report was “exactly what’s needed” to show what will happen if governments don’t act on adaptation.

She suggested it could even have gone a bit further and specifically recommended solutions that don’t just adapt, but actually help mitigate climate change, as many nature-based solutions do.

WATCH | Meet the researchers racing to save the Acadian Peninsula from climate change:

Extreme weather events caused by climate change are eating away at the coastline of New Brunswick’s Acadian Peninsula. A small team of researchers is trying to hold back the waves. 5:40

Ian Burton, professor emeritus at the University of Toronto’s department of geography and planning, who was founding director of the adaptation branch at Environment Canada, said the report’s recommendations are good and he’s hopeful all three levels of government will act on them.

He noted that the federal government funded the report, saying “I hope that will motivate them a little bit to pay attention.”

But the uncertainty about which climate impacts will hit where and when, he said, makes this a challenging problem to tackle.

Even when such reports are commissioned and read by government policy experts, Dale said the pressure to build and repair infrastructure quickly may not allow for new ways of doing things. What’s needed now is political will, she said.

“We know what to do. We have enough new technology … we need political decision-making to move forward.”