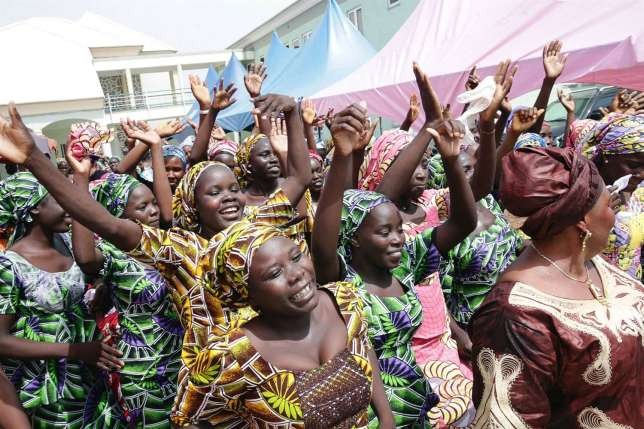 Buhari urged the parents not to lose hope, adding that the government remains focused and determined to bring back the girls.

President Muhammadu Buhari has vowed that as long as he remains the Commander-In-Chief of the Armed Forces, the remaining Chibok girls in Boko Haram captivity will be rescued.

The President stated this in recognition of the fourth anniversary of the abduction of the girls from the Government Girls Secondary School in Chibok, Borno State.

On April 14, 2014, the terrorists invaded the school and kidnapped 276 of the girls but some of them managed to escape shortly after they were taken, leaving 219 in captivity.

In May 2016, one of the missing girls, Amina Ali, was found. She claimed that the remaining girls were still there, but that six had died.

The Federal Government had in October 2016 secured the release of  21 girls following negotiations with their captors.

In May 2017, the government also negotiated the release of 82 more girls. Others remain in captivity as at the time of filing this report.

In a series of the tweets, the Special Assistant to the President on Media and Publicity, Garba Shehu, said Buhari assured the parents of the girls that “their daughters will never be forgotten or abandoned to their fate”.

“Don’t imagine for a moment that we have forgotten about our daughters or that we consider their freedom a lost course,” Shehu quoted the President, who is in London, as saying.

Buhari urged the parents not to lose hope, adding that the government remains focused and determined to see the girls return to their homes.

The President admitted that the process of rescuing the girl has taken too long, blaming the  delay on a breakdown of negotiations with Boko Haram terrorists.

“We are concerned and aware that it is taking long to bring the rest of our daughters back home, but be assured that this administration is doing its very best to free the girls from their captors,” Buhari said.

“Unfortunately, the negotiations between the government and Boko Haram suffered some unexpected setbacks, owing mainly to a lack of agreement among their abductors, whose internal differences have led to a divergence of voices regarding the outcome of the talks.”

He, however, assured the parents of the girls that government is not relenting, urging them to also have faith in his administration’s efforts to reunite them their children with them.