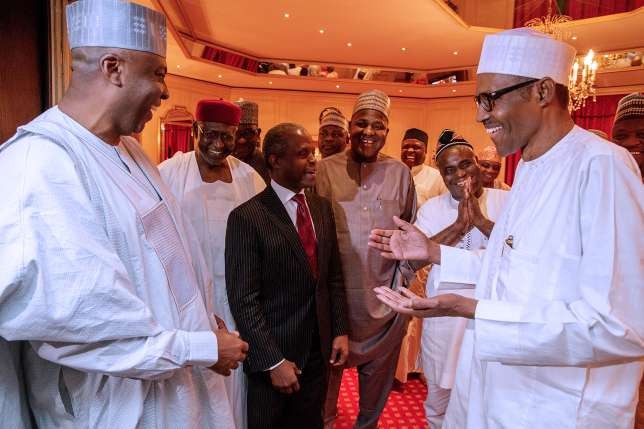 The News Agency of Nigeria (NAN) reports that the meeting which was at the instance of the leadership of NASS, was coming barely 48 hours after the President’s rejection of the Amended Electoral Act Bill sent for his signature by the Assembly.

The News Agency of Nigeria (NAN) gathered that the non-passage of the 2018 appropriation bill by the National Assembly was also said to be one of the top items on the  agenda of the meeting which commenced at about 9.10p.m.

President Buhari had on November 7, 2017 laid the 2018 budget proposals before the NASS with the hope that the appropriation bill might be passed on or before the end of 2017.

However, the lawmakers had  accused some cabinet ministers of failing to appear before them to defend their ministries’ budgets.

Those attending the meeting include the Senate President Bukola Saraki, Speaker of the House of Representatives Yakubu Dogara, Senate leader Ahmad Lawan and other principal officers.

Others attending the meeting are Secretary to the Government of the Federation, Mr Boss Mustapha and Chief of Staff to the President, Malam Abba Kyari.

The two Senior Special Assistant to the President on National Assembly Matters, Mr Ita Enang and Kawu Sumaila were also in attendance