Buhari describes Adamawa people as reliable, trustworthy From His visits To Yola, 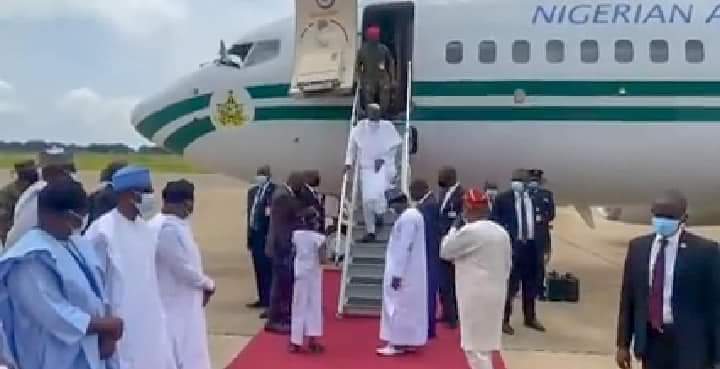 President Muhammadu Buhari, on a condolence visit to the Adamawa State capital, Yola, on Friday, said he had long found people of the state to be reliable and trustworthy.

The president was in Yola to commiserate with Adamawa people over the recent death of indigenes, including the man who headed the committee that handled his transition to the Presidency in 2015, Ahmed Joda.

Joda had died in Yola last Friday at the age of 91 after a brief illness.

Also Read: Shehu Sani Lauds Biden For Pulling US Troops Out Of Afghanistan

President Buhari, who flew into the Yola International Airport in Jimeta just before 11 am, drove immediately to the Lamido Adamawa’s Palace in Yola Town, where he addressed the Lamido, other dignitaries, and family members of the deceased.

The president said, “Since my days as a military ruler to even now that I am a civilian President, I’ve found Adamawa people very reliable.

“That is why when I became the president in 2015, I made one of them the Minister in charge of the Federal Capital Territory Abuja, a challenging task, but I’m not disappointed. He is doing a good job.

“The late Ahmed Joda was equally a good and hardworking person. He headed my transition committee in 2015.”

On his part, Governor Ahmadu Fintiri, who had earlier been at the Yola airport to welcome the president, thanked him for identifying with the people in their moment of grief.

Governor Fintiri said, “Just a few days ago, you sent a powerful delegation led by the Secretary to the Government of the Federation, and today you are here personally to condole us. We thank you, Sir, for this show of love.”

The Lamido of Adamawa, Muhammadu Barkindo Mustafa, also appreciated Buhari for finding time to commiserate with the people.