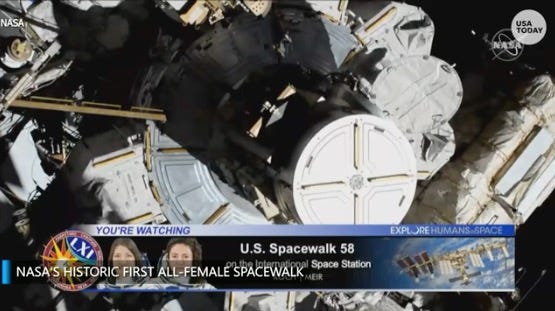 CAPE CANAVERAL, Fla. – Men have floated out the hatch on all 420 spacewalks conducted over the past half-century.

That changed Friday with spacewalk No. 421.

NASA astronauts Christina Koch and Jessica Meir ventured outside the International Space Station before 8 a.m. ET Friday and will spend over five hours replacing a broken battery charger, or BCDU. NASA’s Livestream of the historic spacewalk features astronaut Tracy Caldwell Dyson as one of the female narrators.

The units have previously been replaced using a robotic arm, but the newly failed unit is too far for it to reach.

The units regulate how much energy flows from the station’s massive solar panels to battery units, which are used to provide power during nighttime passes around Earth. Three previous spacewalks had been planned to replace lithium-ion batteries, but those will be rescheduled until the latest BCDU issue is resolved.

NASA’s TESS captured a black hole is shredding a star

The hardware failure does present some concern, especially since another BCDU was replaced in April and there are only four more backups on the station. In total, there are 24 operational BCDUs.

The battery charger failed after Koch and a male crewmate installed new batteries outside the space station last week. NASA put the remaining battery replacements on hold to fix the problem and moved up the women’s planned spacewalk by three days.

All four men aboard the ISS remained inside during Friday’s spacewalk.

The spacewalk is Koch’s fourth and Meir’s first.

Koch and Meir will have some time left over during their extravehicular activity, or EVA, to finish additional tasks like hardware installations for the European Space Agency.

The planned EVA comes almost seven months since the first all-female spacewalk was canceled due to a lack of properly sized spacesuits for astronauts Koch and Anne McClain. Astronaut Nick Hague ended up joining Koch instead.

But this time, the right spacesuit hardware is in place.

NASA, meanwhile, is asking schoolteachers to share photos of their students celebrating “HERstory in the making.” The pictures could be featured on the spacewalk broadcast.

As of Thursday, men dominated the spacewalking field, 213 to 14.

Meir, a marine biologist who arrived at the orbiting lab last month, will be the 15th female spacewalker. Koch, an electrical engineer, is seven months into an 11-month spaceflight that will be the longest by a woman.