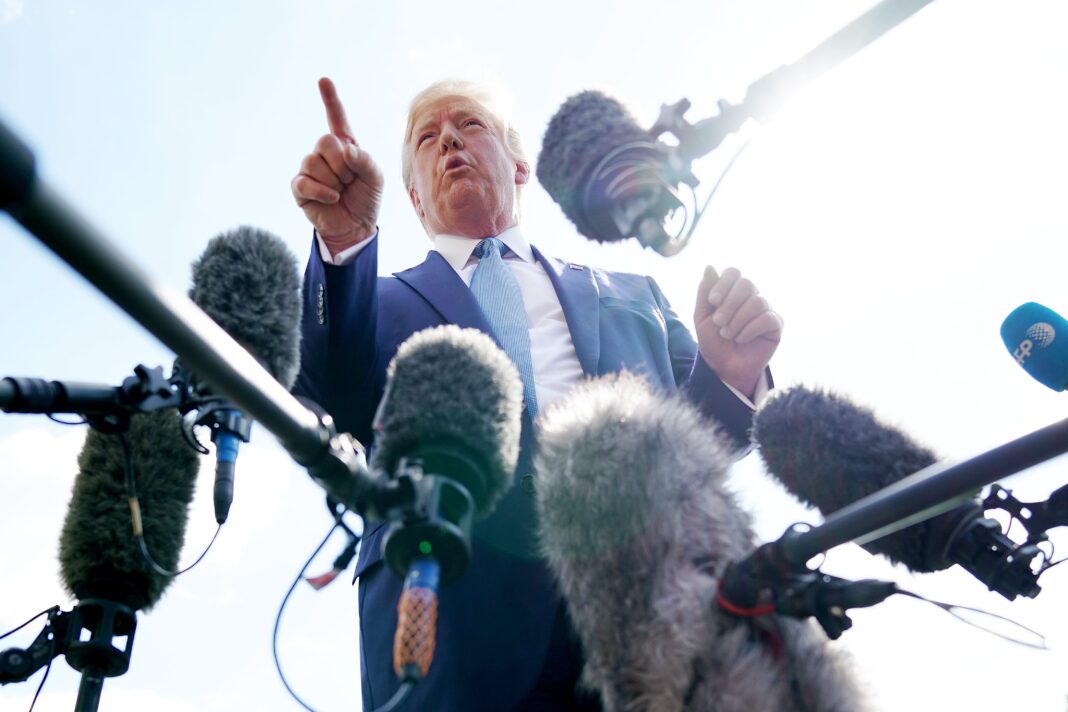 President Donald Trump on Monday lost a federal court battle aimed at keeping a New York prosecutor from examining his tax returns for a criminal investigation, as a federal judge rejected his claim of absolute presidential immunity from criminal investigations. However, Trump’s attorneys filed a notice of an emergency appeal to an appellate court that issued an administrative stay of the ruling, blocking an immediate handover of the tax returns. The decision by the U.S. District Court Judge Victor Marrero in New York’s Southern District marked a legal victory for Manhattan District Attorney Cyrus Vance. He subpoenaed Trump’s tax returns for a criminal investigation of Trump-linked hush-money payments to adult film star Stephanie Clifford, whose stage name is Stormy Daniels, and former Playboy model Karen McDougal.Marrero issued a 75-page ruling that rejected what he termed Trump’s “extraordinary claim” that “the person who serves as president, while in office, enjoys absolute immunity from the criminal process of any kind.”That claim is too broad, wrote Marrero, because it would represent “virtually limitless” protection from criminal investigations not only for sitting presidents but also for associates who might have collaborated in potentially illegal actions.

Marrero wrote that he “cannot endorse such a categorical and limitless assertion of presidential immunity from the judicial process” as being acceptable under the U.S. Constitution. That’s especially true, given the Constitution’s “delicate structure and its calibrated balance of authority among the three branches of the national government, as well as between the federal and state authorities,” wrote Marrero.”Hence, the expansive notion of constitutional immunity invoked here to shield the president from the judicial process would constitute an overreach of executive power.”Ruling that Trump would not suffer irreparable harm and was unlikely to succeed on the merits of his legal arguments, Marrero denied Trump’s motions for a temporary restraining order and preliminary injunction as he dismissed the subpoena challenge. William Consovoy, an attorney representing Trump, immediately filed an emergency notice of appeal with the New York-based U.S. Court of Appeals for the Second Circuit. The appeals court issued a stay pending an expedited review and said it would issue a scheduling order for the case. The legal fight stems from Vance’s August 1st grand jury subpoena to the Trump Organization seeking records and communications relating to the Clifford and McDougal payments and how the transactions were reflected in the company’s records. Both women claimed to have had sexual affairs with Trump. Hush-Money payments: Michael Cohen’s plea deal exposes President Trump to legal, political trouble

Former Trump’s personal attorney Michael Cohen paid $130,000 to Daniels in an effort to buy her silence about her alleged affair with Trump. The payment was made shortly before the 2016 presidential election.

Cohen subsequently pleaded guilty to tax evasion, bank fraud and campaign violations in connection with payments made to Daniels and McDougal.

Separately, Vance’s office subpoenaed Mazars USA LLP, Trump’s longtime accounting firm, seeking some presidential tax returns. Mazars did not raise any of its own objections to the subpoena, Shinerock wrote.

After talks between Vance’s office and Trump’s attorneys broke down over the issue, Trump sued Vance and Mazars in an effort to block any production of his tax returns to prosecutors.

“Virtually ‘all legal commenters agree’ that a sitting President of the United States is not ‘subject to the criminal process’ while he is in office,” Trump’s lawyers wrote in the court complaint, citing a 1972 case.

That’s why the Constitution’s framers “eliminated this possibility and assigned the task to supermajorities of Congress acting with the imprimatur of the nation as a whole,” Trump’s lawyers wrote.

The U.S. Department of Justice and the U.S. Attorney’s Office for the Southern District of New York backed Trump’s legal challenge in filings they submitted to Marrero.

In cases where plaintiffs try to enjoin state criminal proceedings, “a federal court may nevertheless intervene in [the] state proceeding upon a showing of ‘bad faith, harassment or any other unusual circumstance that would call for equitable relief,” attorneys for the Department of Justice and U.S. Attorney’s Office wrote in an Oct. 2nd filing.

Federal courts may also intervene if “the state proceedings [do not] afford an adequate opportunity to raise the constitutional claims,” the lawyers added, citing a 1979 legal decision.

The Manhattan case is just one of several lawsuits launched by the president to block disclosure of his financial records. In Washington, Democratic-led congressional committees investigating Trump are locked in legal battles to obtain his tax returns.

Trump and his namesake businesses filed a lawsuit in April to revoke a subpoena issued by the House Oversight and Reform Committee. The committee had demanded that Mazars provide years worth of records, including meeting notes and communications.

That same month, Trump and three of his children sued a pair of banks to prevent them from providing years of the family’s financial records in response to a subpoena by the House Financial Services and Intelligence committees. One of the banks sued is Deutsche Bank, a longtime lender of Trump and his company.

The House Ways and Means Committee sued in July in an effort to obtain Trump’s financial records. The committee, which sued Treasury Secretary Steve Mnuchin and IRS Commissioner Charles Rettig, is asking a federal judge to compel the administration officials to hand over Trump’s returns.