Both sides to blame in Virginia – Trump 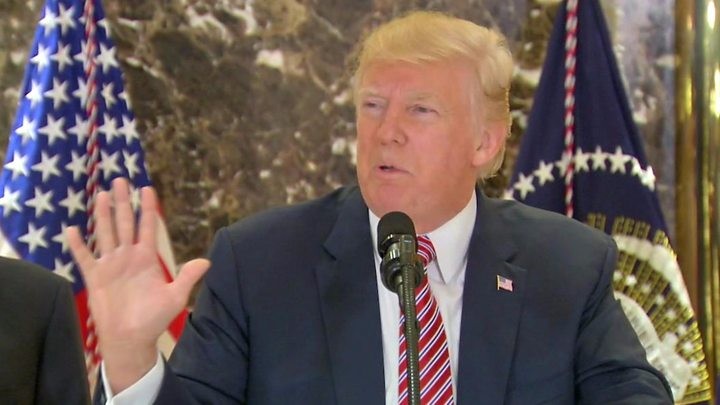 US President Donald Trump has again blamed both sides for the violent unrest in Charlottesville, Virginia, which left one protester dead and others injured.

In a statement on Monday, he had condemned white supremacists.

But in New York on Tuesday he also blamed left-wing supporters for charging at the “alt-right”.

He also defended the time it took to make his statement, saying he had wanted to establish all the facts.

Mr Trump had been accused over the weekend of failing to condemn the far right specifically.

Heather Heyer, 32, died and 19 others were hurt when a car was driven into people protesting against a far-right march in Charlottesville on Saturday.

Mr Trump said that the car driver was a disgrace to himself and his country.

On Monday, Donald Trump’s condemnation of the far-right came from advisers counselling him on what was politically necessary to defuse the growing storm following the Charlottesville violence.

On Tuesday, the president said what he really thought.

Although he initially explained away the delay in condemnations of white supremacists as necessary for him to gather “the facts” of the situation, the nature of the protests were quite evident by the evening before, when demonstrators chanting white supremacist slogans held a torchlight parade through Charlottesville.

In any regard, Mr Trump has shown little reluctance in jumping to conclusions about violent incidents when it appears Islamic extremism is at play.

Upon further questioning, it became clear that the president views the Charlottesville unrest as far from a one-sided affair. Mixed in among the white supremacists, he said, were some good, peaceful people protesting the removal of a statue (of a man who led an army against the US government). And there were plenty of violent individuals among the counter-protesters as well.

When the president on Saturday said there were “many sides” to blame, he meant it.

If Donald Trump’s initial handling of the fallout from Charlottesville started a political fire, on Tuesday the president poured on a bucket of kerosene and danced around the flames.

“When you say alt-right…” Mr Trump said in an exchange with a reporter, using a term for right-wing groups.

Right-wing groups had been protesting against the removal of a statue of General Robert E Lee who commanded the pro-slavery Confederate forces during the American Civil War.

Speaking at the White House on Monday, the US president had said that the Ku Klux Klan, neo-Nazis and white supremacists were “repugnant” to everything Americans held dear.

But at the bad-tempered press conference at Trump Tower on Tuesday, Mr Trump said that those defending the statue had also included “many fine people”.

He asked whether statues of former presidents George Washington and Thomas Jefferson should also be torn down, because they had been slave-owners.

Mr Trump’s remarks were welcomed by David Duke, a former leader of the Ku Klux Klan, who tweeted: “Thank you President Trump for your honesty & courage to tell the truth about #Charlottesville & condemn the leftist terrorists in BLM/Antifa.”

But others strong condemned the comments.

Richard Trumka, president of the AFL-CIO trade union federation, resigned from President Trump’s American Manufacturing Council saying he could not take part “for a president who tolerates bigotry and domestic terrorism”.

US Senate Democratic leader Chuck Schumer tweeted: “Great and good American presidents seek to unite not divide. Donald Trump’s remarks clearly show he is not one of them.”

By saying he is not taking sides, Donald Trump clearly is. When David Duke and white supremacists cheer, you’re doing it very very wrong.

In his address, Mr Trump praised Ms Heyer’s mother, Susan Bro, who had thanked him after his earlier statement for his “words of comfort and for denouncing those who promote violence and hatred”.

But Mr Trump rounded on journalists at the news conference, again saying that many of them were writing “fake news”.

“I had to see the facts, unlike a lot of reporters,” he said at one point.