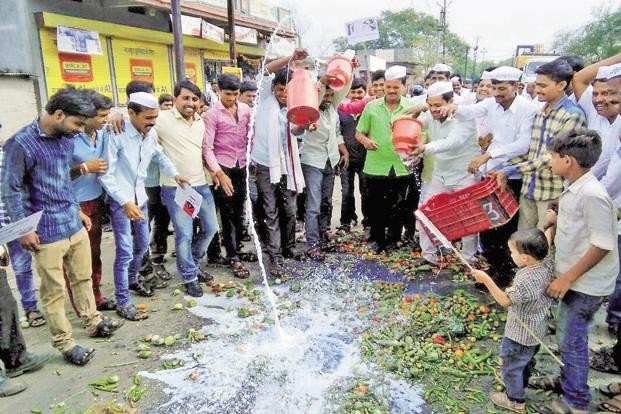 Farmers in Maharashtra have restarted their agitation 62 days after they called off their first 11-day strike for a loan waiver. (Representational image)

For the second consecutive day, farmers’ groups across the state carried out protests seeking a complete waiver of agricultural loans. On Tuesday, farmers protested outside venues where guardian ministers were to hoist the national flag as part of Independence Day celebrations.

Farmers had threatened to prevent ministers from hoisting the Tricolour, insisting that the honour should be given to a farmer instead. Protests were held in Nashik, Nandurbar, Beed, Pune and Aurangabad. Convenor of the agitation, Dr Ajit Nawle, was detained when he tried to protest in the presence of Ahmednagar’s guardian minister Ram Shinde.

“We had earlier stated that we would not allow flag hoisting by any minister. Our national flag is beloved by all. We can’t allow those whose hands are smeared with the blood of farmers to touch it. We wanted the hoisting to be done by a farmer and had sought an audience with the guardian minister, but all of us were detained,” said Dr Nawle. In Pune too, noted activist Dr Baba Adhav held a protest. In Beed, guardian minister Pankaja Munde reportedly could not take part in the flag hoisting programme due to the protests.

Farmers in Maharashtra have restarted their agitation 62 days after they called off their first 11-day strike for a loan waiver. The agitation has resumed as farmers say their demand of a complete waiver was not met. The group has also questioned the utility of the government’s loan waiver and said it has not helped all farmers in the state.

Chief Minister Devendra Fadnavis had, in order to placate farmers, declared that the government’s farm loan waiver scheme would benefit 89 lakh farmers in the state, at a cost of 34,022 crore to the exchequer. The government had limited its waiver to Rs 1.5 lakh per farmer which they opposing.