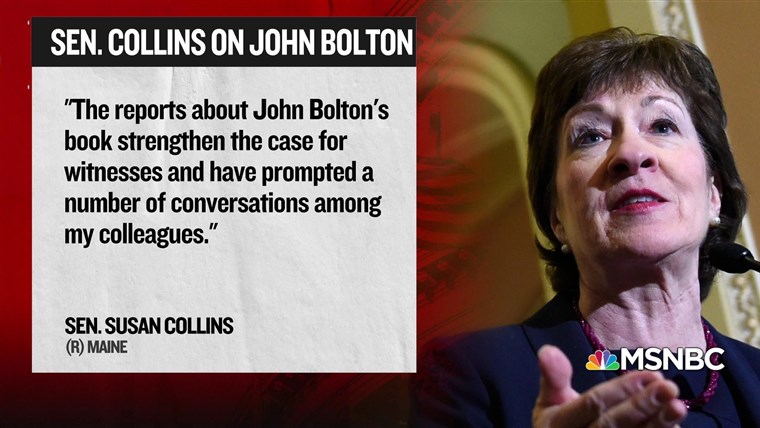 DES MOINES, Iowa — It’s going to hurt Senate Republicans more than they thought it would give President Donald Trump the cover he wants in his impeachment trial.

Former national security adviser John Bolton alleged in an unpublished book manuscript that Trump-linked U.S. aid for Ukraine to political investigations, the same charge at the heart of the impeachment trial, The New York Times reported. That puts Republican senators who are in tight re-election fights, the GOP leaders who hope to keep their majority and assorted moderates all in the position of recalculating how much impeachment-related risk they are willing to accept and how much the president should shoulder.

“Bolton’s thumb has tilted the scale,” said Dan Eberhart, a major GOP fundraiser for Senate candidates who supports Trump. “Protecting the president has become an even harder decision for Republican senators.”

Trump is not in appreciably greater danger of being removed from office right now, but both Democratic and Republican insiders indicated Monday that the odds have risen dramatically that at least one figure with direct knowledge of the president’s orders on Ukraine will testify in the Senate. That’s because Republican senators at risk of losing their seats, along with colleagues who have more latitude to speak and vote for additional testimony without alienating GOP base voters, know that they are substituting Trump’s interests for their own if they preclude Bolton from testifying.

So far, Bolton’s reported allegations do not have the weight of testimony delivered under oath, and Trump has gone to great lengths to prevent anyone in his inner circle from testifying on Capitol Hill — so great that one of the articles of impeachment adopted deals with obstruction of Congress.

Senate Republicans could choose to remain his shield on witnesses. But it will be more difficult to defend themselves against charges of a cover-up if they vote to acquit the president without hearing from witnesses, only to have Bolton’s story corroborate the main allegation against Trump. In such a scenario, the president would get not only the acquittal he seeks but also the ability to counter any charge Bolton makes with the argument that it was not made under oath.

On the other hand, if senators hear Bolton out, they could still contend that the president’s actions do not merit his removal from office; they’ll point out that he’s on the ballot again in November and say it’s up to him to explain his actions to voters. That scenario would leave him to deal with the consequences of Bolton’s testimony, including the possibility that it would lead to more witnesses or damage to his re-election case, but take some pressure off Senate Republicans.

More witnesses also present the only peril, no matter how small, of Trump’s presidency unraveling while his trial is still before the Senate.

The political ramifications of reports on the contents of Bolton’s book were easy to read for both parties.

Sen. Susan Collins, R-Maine, said Monday on Twitter that the news “strengthens the case for witnesses” and has “prompted a number of conversations among my colleagues.”

It’s “turning up the heat,” Sen. Elizabeth Warren, D-Mass., a candidate for the Democratic presidential nomination, told NBC News’ Lester Holt during a break in the impeachment trial.

The new Bolton reports, first published Sunday night by The Times, make it easier for Democrats to vote lockstep in favor of hearing his testimony. It would then take four Republican votes to deliver a majority of senators.

There were obvious signs of a change in the political winds Monday.

Even Sen. Lindsey Graham, R-S.C., a staunch Trump defender whose Democratic challenger, former state party Chairman Jaime Harrison, is raising record sums of cash, shifted gears and said he might be open to calling Bolton along with witnesses the president would like to hear from.

“He may be a relevant witness, but I’ve also said I want to comply with reasonable requests by the president about the Bidens and their involvement with Burisma,” Graham said. “We’re not going to get part of it. We’re going to get all of it.”

Previously, Graham had said he thought former Vice President Joe Biden and his son Hunter Biden could be called to testify before the Senate outside the impeachment trial.

Sen. Lisa Murkowski, R-Alaska, said on Twitter that she remains “curious” about witnesses and that the Senate is getting closer to deciding.

And Sen. Mitt Romney, R-Utah, who is not facing re-election this year, had already indicated his interest in hearing testimony after Trump’s defense team wraps up its defense and lawmakers go through a question-and-answer session.

Brian Darling, a former Senate Republican aide, said that whatever pressure lawmakers in tight races are feeling to show openness to witnesses, they are unlikely to vote for testimony because a betrayal of Trump would cost them more with the GOP voters they’ll need to win.

“Swing state Senators know they are doing themselves more potential political harm if they side with Senate Democrats to request Bolton’s testimony when there is no probability that President Trump will be removed from office,” he said in a text message. “Seems like an unnecessary political risk to go against a president who is polling at record levels of support from Republican voters.”

And Eberhart, the Republican fundraiser, said the situation reminded him of the 2018 nomination battle over Supreme Court Justice Brett Kavanaugh. Kavanaugh was confirmed only after Senate Republican defections allowed Christine Blasey Ford to testify before the Senate Judiciary Committee alleging that Kavanaugh assaulted her when they were teenagers. Kavanaugh denied the allegation.

“Democrats are hoping the red wall in the Senate breaks — just like they were on the Kavanaugh confirmation fight,” he said. That hope was, of course, in vain.

Beyond the senators who publicly expressed openness to witnesses, others plainly indicated a sense that there was a fresh resonance to the discussion within the Republican Conference.

“There is the idea of new information,” said Sen. Mike Braun, R-Ind., a freshman who won his seat by clinging to Trump on all matters of policy. “And I don’t think we’re going to avoid it. It’s just that we have not really addressed it. We know we’ve got to cross that threshold come Thursday or Friday. And whether that’s going to weigh in or not remains to be seen.”

What also remains to be seen is how much pain Republicans are willing to endure for Trump — and how much counterpressure he can put on them — as they try to keep him in office and their majority intact. Or vice versa.