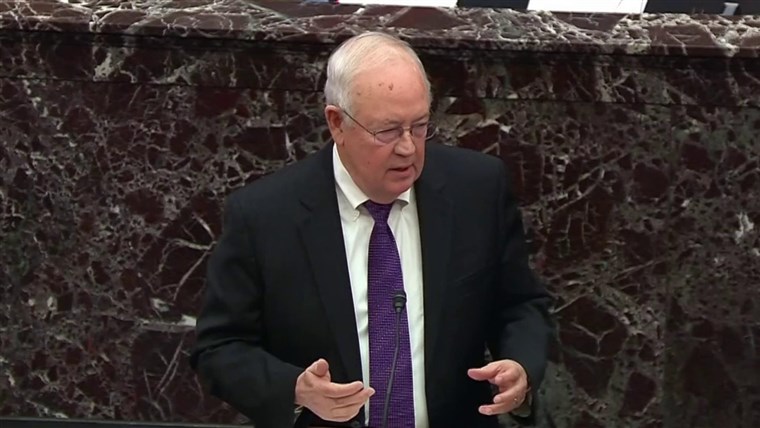 President Donald Trump’s lawyers insisted at his Senate impeachment trial Monday that there was nothing improper about his dealings with Ukraine’s government — and they even offered an impassioned defense of his personal attorney Rudy Giuliani.

Team Trump’s opening arguments also included a presentation from Ken Starr, the independent counsel who investigated Bill Clinton’s affair with a White House intern. “How did we get here, with presidential impeachment invoked frequently in its inherently destabilizing as well as an acrimonious way?” Starr asked the Senate.

Here are six key takeaways from the sixth full day of the Senate impeachment trial.

Despite a report in The New York Times on Sunday night that Bolton writes in a soon-to-be-released book that Trump told him he was withholding aid to Ukraine until the country announced it was investigating the Democratic National Committee and former Vice President Joe Biden, Trump’s legal team asserted there was no connection as they continued their opening arguments.

Jay Sekulow, the president’s personal lawyer, told senators that “no witness” testified to a direct link between the investigations Trump wanted Ukraine to announce and the withholding of nearly $400 million in aid to the country.

“Not a single witness testified the president himself said that there was any connection between any investigation and security assistance, a presidential meeting, or anything else,” Sekulow said.

That’s technically true, but two potential witnesses who the White House blocked from testifying have said there was — Bolton and acting White House chief of staff Mick Mulvaney. Mulvaney said at a press conference the aid freeze was related to the president’s desire to find out what happened in 2016, although he’s since tried to walk back that claim.

The Bolton report did seem to have an impact on Republican senators who can vote on whether to hear from witnesses after a question-and-answer session with House managers and lawyers for the White House, which is expected to wrap up on Thursday.

“I think it’s increasingly likely that other Republicans will join those of us who think we should hear from John Bolton,” said Sen. Mitt Romney, R-Utah. “I’ve spoken with others who’ve opined upon this as well.” Sen. Susan Collins, R-Maine, had similar comments.

Dershowitz, a frequent defender of the president on cable news, argued Monday night that even if Bolton’s allegations against Trump are true, they wouldn’t rise to the level of impeachment.

He kicked off his presentation by noting that he would be making the same constitutional argument against impeachment even if the president were Hillary Clinton and not Donald Trump before going on to acknowledge that in 1998, he held a very different than the one he espoused Monday night.

Dershowitz argued in 1998 during the Clinton impeachment that a president doesn’t have to commit a “technical crime,” such as abuse of power, in order for its rises to an impeachable offense. However, he has said in Trump’s defense that the framers intended for impeachable conduct to mean “criminal-like conduct.”

Former Florida Attorney GeneralPam Bondi focused her time looking at Hunter Biden’s work on the board of the Ukrainian energy company Burisma. She said the vice president’s son was making $83,000 a month, despite being unqualified for the job, and suggested his father pushed to have a Ukrainian prosecutor fired because he wanted to investigate the company.

Several witnesses in the House impeachment inquiry testified the U.S. government, the European Union and the International Monetary Fund all wanted the prosecutor fired because he was not investigating corruption, including at Burisma.

The House managers “say all of this is baseless,” Bondi said. “There was a basis to talk about this, to raise this issue, and that is enough.”

Andrew Bates, a spokesman for the Biden campaign, said, “Here on Planet Earth, the conspiracy theory that Bondi repeated has been conclusively refuted.”

In all, Bondi and lawyer Eric Herschmann spent over 45 minutes talking about the Bidens and Burisma.

Another Trump lawyer, Jane Raskin, told the Senate that House Democrats were using Trump’s personal lawyer Rudy Giuliani’s escapades in Ukraine as a “colorful distraction.” Giuliani, she said, was trying to defend Trump in the Mueller probe by trying to offering up dirt on the Bidens.

Giuliani thanked her on Twitter, saying she did a “masterful job.”

Ken Starr, the independent counsel whose investigation of Bill Clinton included questioning Secret Service agents and getting a blood sample from the president as he investigated whether the president had an affair with an intern, said impeachment proceedings are being used “too frequently.”

Trump is the third U.S. president to be impeached, and Starr advocated for impeachment of the second, Clinton.

“We are living in what I think can aptly be described as the ‘age of impeachment,'” Starr bemoaned.