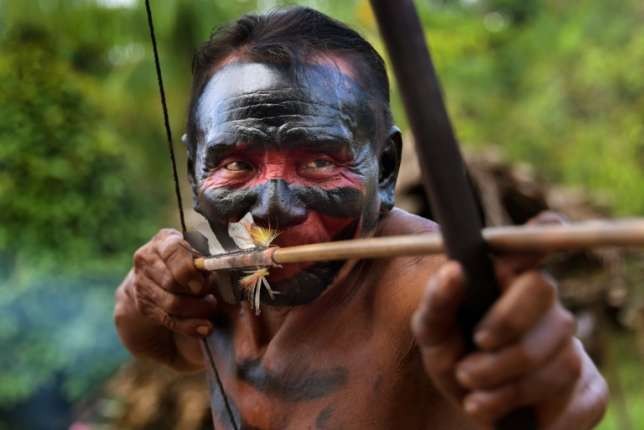 These are the Waiapi, an ancient tribe living in Brazil‘s Amazon rainforest but now fearing invasion by international mining companies.

Leading AFP reporters to a tiny settlement of palm-thatched huts hidden in foliage, the tribesmen streaked in red and black dye vow to defend their territory. They brandish six-foot (two-meter) bows and arrows to reinforce the point.

The Waiapi indigenous reserve is in pristine rainforest near the eastern end of the Amazon river. It is part of a much larger conservation zone called Renca, covering an area the size of Switzerland.

Surrounded by rivers and towering trees, the tribe operates almost entirely according to its own laws, with a way of life at times closer to the Stone Age than the 21st century.

Yet modern Brazil is barely a few hours’ drive away.

And now the center-right government is pushing to open Renca to international mining companies who covet the rich deposits of gold and other metals hidden under the sea of green.

Temer backtracked in September. However, the Waiapi, who were nearly wiped out by disease after being discovered by outsiders in the 1970s, remain terrified.

The rainforest, says 35-year-old Moi Waiapi, another inhabitant of Pinoty, “is the foundation for our survival.”

The dirt road is the only route into Waiapi territory. Pinoty, where a few dozen people sleep in hammocks under roofs with open sides, is the first village — the frontier.

To get here requires several layers of authorization, then a bumpy two-hour drive from the small town of Pedra Branca. The Amapa state capital Macapa, one of the most remote in Brazil, is several hours further.

By the time you reach Pinoty and a government sign reading “Protected Land,” you are already well beyond cellphone reception, the electric grid, the last gas station, and many Brazilian laws.

But for all the remoteness, the Waiapi have scant protection against the powerful forces that for decades have pushed industry and agribusiness deeper and deeper into the Amazon in a bid to make Brazil a commodities exporting superpower.

The road itself is a monument to those ambitions.

Known as the Northern Perimetral, highway 210 was started under the 1964-1985 military dictatorship with the aim of linking Brazil to Venezuela.

The Waiapi are one of the most traditional tribes in Brazil’s Amazon, but modern life is getting closer

Funding collapsed and the road was abandoned in the 1970s, literally stopping dead in the deep jungle, more than 700 miles (1,100 km) from its intended goal.

But even unfinished, the pharaonic project retains an ominous presence. Barely a car a day passes, yet the road to nowhere, slicing in a broad red scar through the tree-covered hills, has been remarkably well maintained.

Calibi Waiapi, another tribal villager, suspects that the government hopes one day to resurrect that dream of a thoroughfare through the wilderness. Wearing a circular headdress of parrot feathers, Calibi frowns at the thought.

“There’d be cars, trucks, violence, drugs, robberies. The culture would change. The young would want the cellphones, the clothes, the computers,” the 57-year-old says as he imagines Brazilians pouring down the road.

“If a lot of white men came, it would be the end.”

Hotter heads threaten a violent response to any attempt at encroachment.

“If Temer comes here, anywhere near me, this is what he’ll get,” says Tapayona Waiapi, brandishing one of the long arrows, tipped in a lethally sharp sliver of wood.

Although the Waiapi have had shotguns for hunting since first contact with the government in the 1970s, they still also use arrows, which are poisoned.

“These are our weapons so that we are not dependent on non-Indian weapons,” said Aka’upotye Waiapi, 43, in Manilha village, as he carved a new bow.

But the show of force by the tribesmen, one of whom swung a club in the shape of a wooden ax, was mostly bravado.

There are only about 1,200 Waiapi, scattered in villages reached by foot or river: they can barely monitor, let alone protect their territory. Just this May, an illegal mine was discovered and shut down a mile south of Pinoty.

Jawaruwa Waiapi, 31, says that fighting or even fleeing into the forest will no longer work.

Last year he was elected to the municipal council in Pedra Branca, the first member of his tribe to hold a Brazilian political post. He says peaceful persuasion is the only viable way now.

“We have another road, another strategy, which is to participate in political life,” he said.

“Today we don’t have to fight with arrows or clubs. We have to fight through knowledge, through politics…. This is our new weapon.”