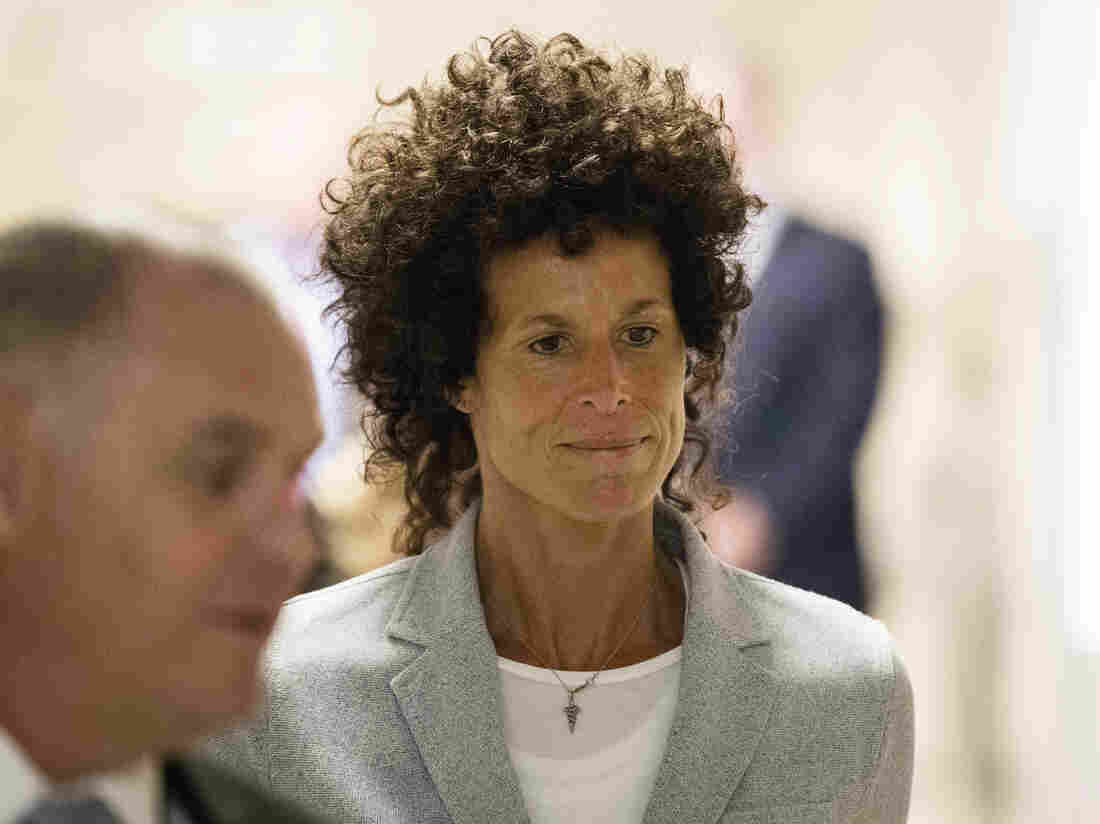 Andrea Constand walks to the courtroom during Bill Cosby’s sexual assault trial in Norristown, Pa., on Tuesday. Cosby is accused of drugging and sexually assaulting Constand at his home outside Philadelphia in 2004. Matt Rourke/AP hide caption

Andrea Constand walks to the courtroom during Bill Cosby’s sexual assault trial in Norristown, Pa., on Tuesday. Cosby is accused of drugging and sexually assaulting Constand at his home outside Philadelphia in 2004.

Andrea Constand claims Bill Cosby drugged and assaulted her in 2004 while she was working for Temple University’s women’s basketball team. Today, in a Pennsylvania courtroom, she told her story publicly for the first time.

“In my head, I was trying to get my hands to move or my legs to move, but I was frozen,” Constand said, according to the Associated Press. “I wasn’t able to fight in any way. …. I wanted it to stop.”

Cosby, who is now 79, is charged with sexually assaulting Constand in his home outside Philadelphia. According to the wire service, Constand was “calm and collected” while she testified, and looked at the jury as she described the assault:

“She said Cosby gave her pills he claimed were a natural remedy to ease her stress about a looming career change. ‘They’re your friends. They’ll take the edge off,’ she quoted him as saying.

“She told the jury she started feeling woozy after about 20 minutes, with blurred vision, slurred words and legs that felt like rubber. Cosby then [assaulted her], she said.

“She said she was unable to push him away or tell him to stop.

“Cosby, sitting across the room at the defense table, leaned in to listen, whispered to his lawyer and, at times, shook his head.”

According to WHYY reporter Laura Benshoff, who spoke with NPR’s All Things Considered, Constand described meeting Cosby at a Temple basketball game, where he inquired about some facilities in the women’s locker room. Cosby became a mentor to Constand, and he would sometimes invite her to dinners at his house either alone or with others.

Benshoff says Constand testified that on a previous occasion Cosby tried to unzip her pants, but she rejected the advance and said, “I’m not here for that. I don’t want that.”

The defense has highlighted phone records showing that Constand called Cosby 53 times after she says he assaulted her, the AP reports. Constand said the calls mostly concerned the women’s basketball team.

“It had more to do with business than it did with me personally,” she said.

More than 50 women have said that Cosby assaulted them, but the statute of limitations has run out in nearly all cases. Only in Constand’s case has Cosby been charged.

Cosby said in a recent interview that he won’t testify in the trial.

The mostly white jury is composed of seven men and five women, according to WHYY’s Bobby Allyn. On Monday, the first day of the trial, prosecutor Kristen Feden asked jurors not to let memories of Cosby as a TV actor and comedian cloud their judgment of what happened to Constand 13 years ago.

The defense attorney, on the other hand, asked jurors yesterday to “be the juror you would be if this was your own grandfather,” Allyn reports, and pointed to apparent inconsistencies in Constand’s statements to suggest that she couldn’t be trusted.

In yesterday’s testimony, a woman identified as “victim number six” described being drugged and sexually molested by Cosby. Allyn reports that the woman was subjected to a tough cross-examination by Cosby’s attorney, who attempted to show that her memory was incorrect.

The judge in the case has forbidden cameras in the courtroom, and reporters must turn off their phones throughout the proceedings.