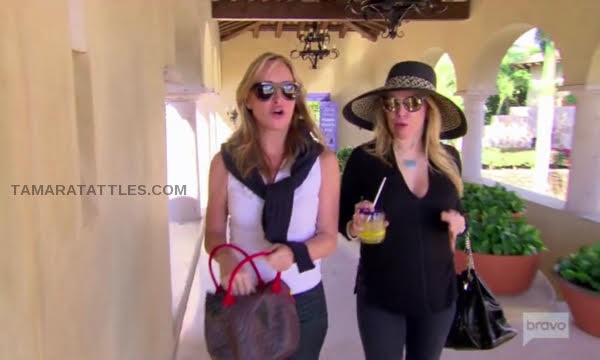 When The Real Housewives of New York City stars drink some tequila in Tequila, Mexico, anything can—and will—happen.

E! News caught up with Bethenny Frankel, the woman behind the big trip that already saw Luann D’Agostino take two big spills, Ramona Singer and Sonja Morgan battle the other Housewives over rooms, and Tinsley Mortimer have a little breakdown over being written up in the paper, for a tequila tasting. There, she spilled on what’s ahead.

“My best memory of Mexico was the day that we all went to Tequila,” Bethenny told us. “That was my rose, which is the high point, and my thorn was behind the scenes the girls were whispering…people were feeling a little resentful about the origin of the trip. To be honest, [Carole Radziwill] did check everyone, like, ‘Can’t you just be happy?'”

Seems some of the ladies were vocal about it being a trip having to do with Bethenny’s Skinnygirl empire, which caused B feeling the need to go about “apologizing for my success.”

“I was just a little self-conscious about the trip being about me and my product, that’s the truth,” she said.

And of course Luann’s tumbles were a highlight for Bethenny (and viewers). “Luann falling down twice without a scratch on her was pretty fantastic too. The elasticity in her body from the tequila is mesmerizing,” she said. “And she got up to surf the next day! And did yoga!”

Overall, the trip was like, “The Golden Girls meets The Hangover,” Bethenny said of all the drunken moments, which viewers have only gotten a glimpse of. There’s another Dorinda Medley moment coming and you have to see Bethenny’s impersonation in the video above.

“We went to Tequila and we came home, got to the prison base and the wheels came off. That’s what happened,” Bethenny said.

Bethenny has a lot of experience traveling with Housewives and ultimately singled out Luann for being the best one for several reasons. “Because Luann gets ready quickly, she can hold her liquor, she’s fun, she doesn’t get in a bad mood and she’s up for anything,” she told us.

As for Ramona, well, Bethenny didn’t mince words about Ramona and her behavior on the trip.

“Ramona traveling with? You ought to put her in a f—king dog and pretend she’s a pet. She acts like an animal…She’s a disaster. Ramona is not even part of the human species. There’s no amount of tequila, face paint—there’s nothing to do to drink Ramona pretty on a trip,” Bethenny said.

The Real Housewives of New York City airs Wednesdays, 9 p.m. on Bravo. Be sure to watch E! News at 7 and 11 p.m. for more from Bethenny Frankel’s tequila tasting.