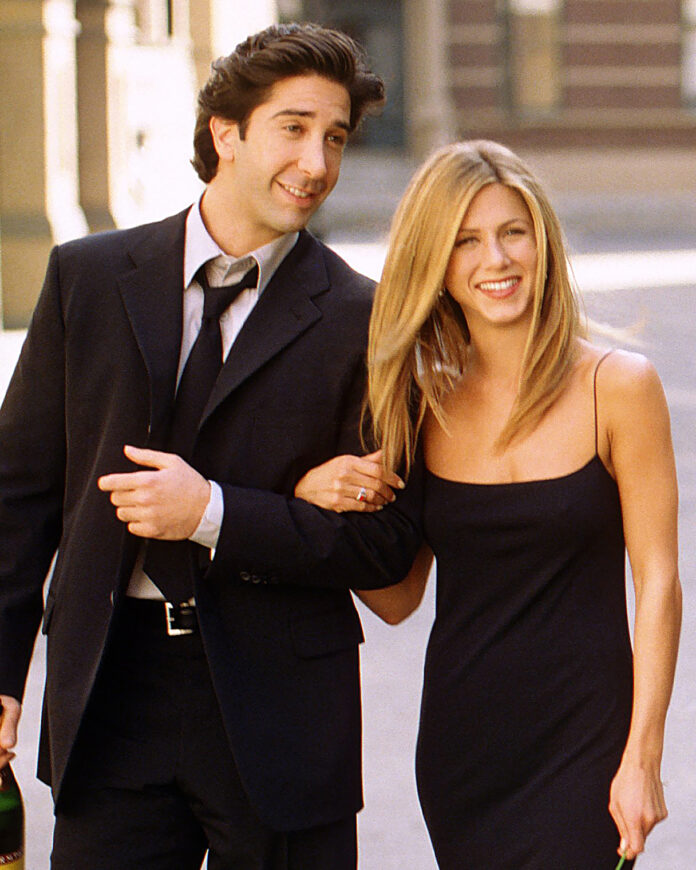 Ross and Rachel forever? Jennifer Aniston revealed if Ross and Rachel stayed together after Friends ended in an Instagram comment on Wednesday, October 16.

‘Friends’ Stars: Then and Now!

The 50-year-old actress made her record-breaking Instagram debut with a selfie of the Friends cast on Tuesday, October 15. She captioned the selfie with former costars Lisa Kudrow, Courteney Cox, Matt LeBlanc, Matthew Perry and David Schwimmer, “And now we’re Instagram FRIENDS too. HI INSTAGRAM.”

Kaitlyn Bristowe took the opportunity to ask what every Friends fan wants to know. “ARE YOU AND ROSS STILL TOGETHER!!???” the former Bachelorette, 34, commented. Aniston replied, “well we’re on a break.”

Ross (Schwimmer) and Rachel’s on-again-off-again relationship was a major plotline for the majority of the show’s run until its conclusion in 2004. One of the show’s most iconic episodes, “The One Where Ross And Rachel Take A Break,” featured Ross cheating on Rachel. Throughout the series, the couple can’t agree on whether they were on a break or not, thus creating one of Friends‘ longest-running jokes.

However, Friends co-creator Marta Kauffman has a different point of view. In an interview at the 25th Anniversary Celebration of Friends at the Tribeca TV Festival in New York City in September, the 63-year-old TV producer said she thinks Ross and Rachel are still together.

Aniston’s selfie led her to break the Guinness World Record for gaining 1 million followers in five hours and 16 minutes on Instagram. The previous title holders were Prince Harry and Duchess Meghan whose joint Instagram reached 1 million followers in the fastest time in April. The actress confessed on Jimmy Kimmel Live! on Wednesday that she stalked people on Instagram before going public with her account.

“Well, it was a stalker account, yes,” she told Jimmy Kimmel. “When I was thinking about doing this, I sort of figured it was time to kind of understand the world and dip my toe into the sort of social media pool.”

Aniston revealed on the Howard Stern Show earlier this month that she recently reunited with the Friends cast for dinner at Cox’s, 55, house with Kudrow, 56,  LeBlanc, 52, Schwimmer, 52,  and Perry, 50. The photo might have been taken during their get together.

20 Plot Holes and Inconsistencies in ‘Friends’

“The whole gang. Everyone was there,” she told Howard Stern. “Schwimmer was in town and we all happened to have a window of time, so we all got together.”

In August, Aniston told InStyle that she missed the period in her life when she was on Friends. “I miss a lot about that time. Having a job that was absolute, pure joy,” she said. “I miss getting to be with people I love massively and respect beyond words. So, yes, these days I’m super nostalgic. Anything can make me go, ‘Aww.’ Even Fred Segal, I guess. I don’t know why that one got me.”

She also shared on The Ellen DeGeneres Show in June that she and the rest of the cast would be interested in reprising their roles. “I would do it. The girls would do it. And the boys would do it, I’m sure,” she said.

The truth about Kylie Jenner and Cardi B’s relationship